Flag of Uzbekistan facts for kids 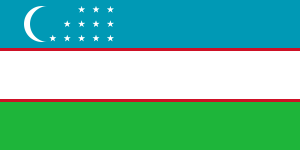 The flag of Uzbekistan was created in 1991.

This is How the Arabic word Allah resembles the stars

It has three horizontal bands of blue, white and green, separated by two thin red fimbriations, with a crescent moon which is a Turkic symbol and twelve stars at the canton that represents Allah in the Arabic script.

All content from Kiddle encyclopedia articles (including the article images and facts) can be freely used under Attribution-ShareAlike license, unless stated otherwise. Cite this article:
Flag of Uzbekistan Facts for Kids. Kiddle Encyclopedia.