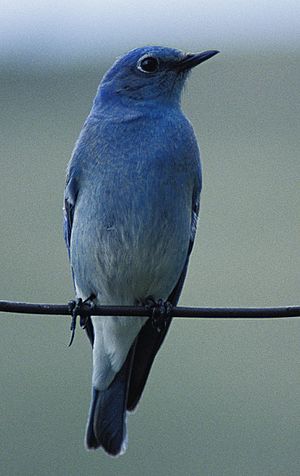 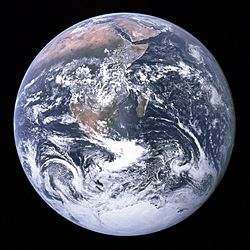 Blue is one of the colors of the rainbow that people can see. It is one of the three primary colors, along with red and yellow. It has the shortest wavelength of these colors (about 470 nanometers).

Blue is the color of the Earth's sky and sea. Earth looks blue when seen from outer space by astronauts.

Blue is a color used to show coldness. It is also one of the colors your lips can turn if you are chilly.

Blue is the colour of light between violet and green on the visible spectrum. Hues of blue include indigo and ultramarine, closer to violet; pure blue, without any mixture of other colours; Cyan, which is midway on the spectrum between blue and green, and the other blue-greens turquoise, teal, and aquamarine.

Blue pigments were originally made from minerals such as lapis lazuli, cobalt and azurite, and blue dyes were made from plants; usually woad in Europe, and Indigofera tinctoria, or true indigo, in Asia and Africa. Today most blue pigments and dyes are made by a chemical process.

In science and industry

Blue pigments were made from minerals, especially lapis lazuli and azurite (Cu3(CO3)2(OH)2). These minerals were crushed, ground into powder, and then mixed with a quick-drying binding agent, such as egg yolk (tempera painting); or with a slow-drying oil, such as linseed oil, for oil painting. To make blue stained glass, cobalt blue (cobalt(II) aluminate: CoAl2O4)pigment was mixed with the glass. Other common blue pigments made from minerals are ultramarine (Na8-10Al6Si6O24S2-4), cerulean blue (primarily cobalt (II) stanate: Co2SnO4), and Prussian blue (milori blue: primarily Fe7(CN)18).

Natural dyes to colour cloth and tapestries were made from plants. Woad and true indigo were used to produce indigo dye used to colour fabrics blue or indigo. Since the 18th century, natural blue dyes have largely been replaced by synthetic dyes.

Isaac Newton included blue as one of the seven colours in his first description the visible spectrum, He chose seven colours because that was the number of notes in the musical scale, which he believed was related to the optical spectrum. He included indigo, the hue between blue and violet, as one of the separate colours, though today it is usually considered a hue of blue.

In painting and traditional colour theory, blue is one of the three primary colours of pigments (red, yellow, blue), which can be mixed to form a wide gamut of colours. Red and blue mixed together form violet, blue and yellow together form green. Mixing all three primary colours together produces a dark grey. From the Renaissance onwards, painters used this system to create their colours. (See RYB colour system.)

The RYB model was used for colour printing by Jacob Christoph Le Blon as early as 1725. Later, printers discovered that more accurate colours could be created by using combinations of magenta, cyan, yellow and black ink, put onto separate inked plates and then overlaid one at a time onto paper. This method could produce almost all the colours in the spectrum with reasonable accuracy.

In the 19th century the Scottish physicist James Clerk Maxwell found a new way of explaining colours, by the wavelength of their light. He showed that white light could be created by combining red, blue and green light, and that virtually all colours could be made by different combinations of these three colours. His idea, called additive colour or the RGB colour model, is used today to create colours on televisions and computer screens. The screen is covered by tiny pixels, each with three fluorescent elements for creating red, green and blue light. If the red, blue and green elements all glow at once, the pixel looks white. As the screen is scanned from behind with electrons, each pixel creates its own designated colour, composing a complete picture on the screen.

On the HSV colour wheel, the complement of blue is yellow; that is, a colour corresponding to an equal mixture of red and green light. On a colour wheel based on traditional colour theory (RYB) where blue was considered a primary colour, its complementary colour is considered to be orange (based on the Munsell colour wheel).

Why the sky and sea appear blue

Of the colours in the visible spectrum of light, blue has a very short wavelength, while red has the longest wavelength. When sunlight passes through the atmosphere, the blue wavelengths are scattered more widely by the oxygen and nitrogen molecules, and more blue comes to our eyes. This effect is called Rayleigh scattering, after Lord Rayleigh, the British physicist who discovered it. It was confirmed by Albert Einstein in 1911.

Near sunrise and sunset, most of the light we see comes in nearly tangent to the Earth's surface, so that the light's path through the atmosphere is so long that much of the blue and even green light is scattered out, leaving the sun rays and the clouds it illuminates red. Therefore, when looking at the sunset and sunrise, the colour red is more perceptible than any of the other colours.

The sea is seen as blue for largely the same reason: the water absorbs the longer wavelengths of red and reflects and scatters the blue, which comes to the eye of the viewer. The colour of the sea is also affected by the colour of the sky, reflected by particles in the water; and by algae and plant life in the water, which can make it look green; or by sediment, which can make it look brown.

The farther away an object is, the more blue it often appears to the eye. For example, mountains in the distance often appear blue. This is the effect of atmospheric perspective; the farther an object is away from the viewer, the less contrast there is between the object and its background colour, which is usually blue. In a painting where different parts of the composition are blue, green and red, the blue will appear to be more distant, and the red closer to the viewer. The cooler a colour is, the more distant it seems.

Blue eyes do not actually contain any blue pigment. Eye colour is determined by two factors: the pigmentation of the eye's iris and the scattering of light by the turbid medium in the stroma of the iris. In humans, the pigmentation of the iris varies from light brown to black. The appearance of blue, green, and hazel eyes results from the Rayleigh scattering of light in the stroma, an optical effect similar to what accounts for the blueness of the sky. The irises of the eyes of people with blue eyes contain less dark melanin than those of people with brown eyes, which means that they absorb less short-wavelength blue light, which is instead reflected out to the viewer. Eye colour also varies depending on the lighting conditions, especially for lighter-coloured eyes.

Blue eyes are most common in Ireland, the Baltic Sea area and Northern Europe, and are also found in Eastern, Central, and Southern Europe. Blue eyes are also found in parts of Western Asia, most notably in Afghanistan, Syria, Iraq, and Iran. In Estonia, 99% of people have blue eyes. In Denmark 30 years ago, only 8% of the population had brown eyes, though through immigration, today that number is about 11%. In Germany, about 75% have blue eyes.

In the United States, as of 2006, one out of every six people, or 16.6% of the total population, and 22.3% of the white population, have blue eyes, compared with about half of Americans born in 1900, and a third of Americans born in 1950. Blue eyes are becoming less common among American children. In the US, boys are 3–5 per cent more likely to have blue eyes than girls.

Lasers emitting in the blue region of the spectrum became widely available to the public in 2010 with the release of inexpensive high-powered 445-447 nm laser diode technology. Previously the blue wavelengths were accessible only through DPSS which are comparatively expensive and inefficient, however these technologies are still widely used by the scientific community for applications including optogenetics, Raman spectroscopy, and particle image velocimetry, due to their superior beam quality. Blue gas lasers are also still commonly used for holography, DNA sequencing, optical pumping, and other scientific and medical applications.

All content from Kiddle encyclopedia articles (including the article images and facts) can be freely used under Attribution-ShareAlike license, unless stated otherwise. Cite this article:
Blue Facts for Kids. Kiddle Encyclopedia.