The cyan, magenta, yellow and black (key) pigments (CMYK) found in an inkjet printer that can be used for color photographic reproduction.

Primary colors (or primary colours) are sets of colors that can be combined to make a useful range of colors. The primary colors are those which cannot be created by mixing other colors in a given color space.

For subtractive combination of colors, as in mixing of pigments or dyes for printing, the primaries normally used are cyan, magenta, and yellow, though the set of red, yellow, blue is popular among artists.

For additive combination of colors, as in overlapping projected lights or in CRT displays, the primary colors normally used are red, green, and blue.

Primary colors are not a fundamental property of light but are related to the physiological response of the eye to light (the way the eye works). For humans, three primary colors are usually used, since human color vision is trichromatic. 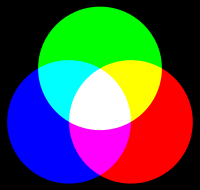 Media that combine emitted lights to create the sensation of a range of colors are using the additive color system. Television is the most common use of this.

The additive primaries are red, green, and blue. Because of the response curves of the three different color receptors in the human eye, these colors are optimal in the sense that the largest range of colors — a gamut — visible by humans can be generated by mixing light of these colors. Additive mixing of red and green light, produce shades of yellow or orange. Mixing green and blue produces shades of cyan, and mixing red and blue produces shades of purple and magenta. Mixing equal proportions of the additive primaries results in shades of grey; when all three colors are fully saturated, the result is white. The color space that is generated is called the RGB ("red, green, blue") color space. 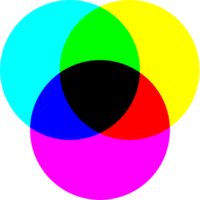 The color space generated is the so-called CMYK color space. The abbreviation stands for "Cyan, Magenta, Yellow, and Black" — K stands for "Kohle" (German for coal) and is used to represent black as 'B' could be confused with 'Blue'.

In practice, mixtures of actual materials like paint tend to be less precise. Brighter, or more specific colors can be created using natural pigments instead of mixing, and natural properties of pigments can interfere with the mixing. For example, mixing magenta and green in acrylic creates a dark cyan - something which would not happen if the mixing process were perfectly subtractive. In the subtractive model, adding white to a color does not (in theory) change its hue but does reduce its saturation. In fact, adding white usually does change the hue slightly (this is known as the Abney effect), for example, adding white to red makes it slightly bluish, or pink.

All content from Kiddle encyclopedia articles (including the article images and facts) can be freely used under Attribution-ShareAlike license, unless stated otherwise. Cite this article:
Primary color Facts for Kids. Kiddle Encyclopedia.