Cobalt blue or Mohammedan blue in impure forms had long been used in Chinese porcelain, but it was independently discovered as a pure alumina-based pigment by Louis Jacques Thénard in 1802. Commercial production began in France in 1807. 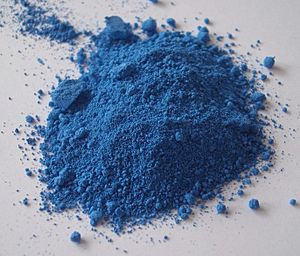 The first recorded use of cobalt blue as a color name in English was in 1777. The leading world manufacturer of cobalt blue in the 19th century was Benjamin Wegner's Norwegian company Blaafarveværket. 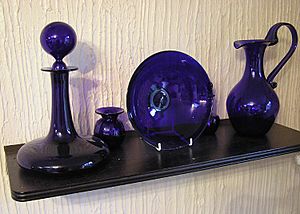 Bristol blue glassware. The color is due to cobalt ions in the glass. 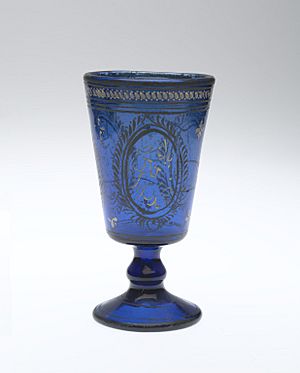 Cobalt blue is toxic when inhaled or ingested. Potters who fail to take adequate precautions when using cobalt blue may succumb to cobalt poisoning.

All content from Kiddle encyclopedia articles (including the article images and facts) can be freely used under Attribution-ShareAlike license, unless stated otherwise. Cite this article:
Cobalt blue Facts for Kids. Kiddle Encyclopedia.