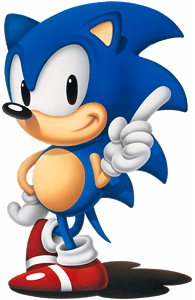 Sonic the Hedgehog has been Sega's mascot since the character's introduction in 1991.

Sega (Japanese: セガ) is a company that makes video games. In the past, they also made video game consoles. Their main office is in Tokyo, a city in Japan. They also have offices in other continents – for example, North America and Europe. Their most famous video games are the Sonic the Hedgehog series. 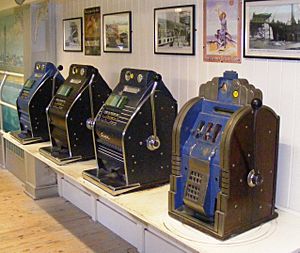 The Diamond 3 Star, a model of coin-operated slot machines produced by Sega in the 1950s

The Sega Mega Drive (Japanese: メガドライブ, Mega Doraibu) was a 16-bit video game console made by Sega. It was in market in Japan in (1988), and in Europe and the rest of the world in (1990). In North America, it was called Sega Genesis.

A CD add-on for the Sega Genesis that let you play optical discs which could hold movies and high quality audio. It was not well received but has a strong base of fans.

The Sega 32X was an attempt to top the graphics of the Super Nintendo in the 90's. Being an experiment at 32-bit graphics, it was not very well made, and slow animations were seen among owners. The 32X later died, but Sega didn't stop there. Later, they made CD32X games, which required both the 32X and CD.

Sega Saturn was released on November 22/10, 1997/1999 in Japan/France. It was the first Sega video game console with 3D graphics. Sega released two versions of the Saturn : the first generation was black and with small controllers, and the second was white. One of its most popular games was Sonic R.

Sega Dreamcast (Japanese: ドリームキャスト; originally called "Dural," and "Katana") is the last machine made by Sega that can play video games. It was sold before the PlayStation 2, GameCube, or Xbox came out. However, not many people bought it after the PlayStation 2 was released, so in the end Sega decided to stop making them.

The Sega Pico, also known as Kids Computer Pico, is an educational video game console by Sega Toys. Marketed as "edutainment", the main focus of the Pico was educational video games for children between 3 and 7 years old. The Pico was released in June 1993 in Japan and November 1994 in North America and Europe, later reaching China. It was succeeded by the Advanced Pico Beena, which was released in Japan in 2005. Though the Pico was sold continuously in Japan through the release of the Beena, in North America and Europe the Pico was less successful and was discontinued in early 1998, later being re-released by Majesco Entertainment. Releases for the Pico were focused on education for children and included titles supported by licensed franchised animated characters, including Sega's own Sonic the Hedgehog series. Overall, Sega claims sales of 3.4 million Pico consoles and 11.2 million game cartridges, and over 350,000 Beena consoles and 800,000 cartridges.

All content from Kiddle encyclopedia articles (including the article images and facts) can be freely used under Attribution-ShareAlike license, unless stated otherwise. Cite this article:
Sega Facts for Kids. Kiddle Encyclopedia.