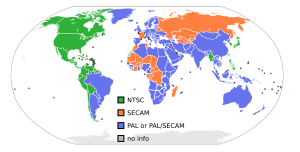 The first handheld game console released in the fourth generation was the Game Boy, on April 21, 1989. The Game Boy became the most popular handheld game console. The Game Boy's screen had no color. However, many of its leading competitors did. Three major franchises were introduced for the Game Boy. These include: Tetris, Pokemon and Kirby. Many of the popular games in this generation originally started in the 8-bit generations. These titles include Mario, Metroid, Zelda, Star Fox, Kirby, Dragon Quest, Final Fantasy, Seiken Densetsu (Secret of Mana), Sonic the Hedgehog, Donkey Kong, Street Fighter, Mortal Kombat and Mega Man X.

The next generation would be the one that changed everything.

All content from Kiddle encyclopedia articles (including the article images and facts) can be freely used under Attribution-ShareAlike license, unless stated otherwise. Cite this article:
History of video game consoles (fourth generation) Facts for Kids. Kiddle Encyclopedia.