The Game Boy has a green screen that displays four shades of dark green (gray for the Game Boy Pocket). Like the NES, the Game Boy has four buttons and a cross-shaped direction pad. The console has a single speaker, and it can be used with stereo headphones. As many as four Game Boys can be connected together with the Game Boy Link Cable.

The Game Boy was invented by Gunpei Yokoi, who also was responsible for creating the failed Virtual Boy and the Game & Watch games.

Recently, the Game Boy went vs all Nintendo handhelds (1989-2016), and the Game Boy was triumphant in beating all the other systems. The Game Boy provided the most game play at its time, and currently still does.

The Game Boy was designed by Nintendo's chief engineer Gunpei Yokoi and its Nintendo R&D1 team. Following the popularity of the Nintendo Entertainment System, he pitched the Game Boy concept to Nintendo president Hiroshi Yamauchi and began working on it. The original internal code name for the Game Boy is Dot Matrix Game, referring to its dot-matrix display in contrast to the preceding Game & Watch series (which Yokoi had created in 1980) that has segmented LCD displays pre-printed with an overlay, limiting each model to only play one game. The initials DMG came to be featured on the final product's model number: "DMG-01". Internal reception of the console at Nintendo was initially very poor, with the derogatory nickname "DameGame" from Nintendo employees, in which dame (だめ) means "hopeless" or "lame". 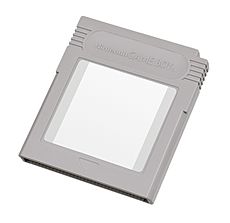 The standard gray cartridge for the original Game Boy games

The Game Boy has four operation buttons labeled "A", "B", "SELECT", and "START", and a directional pad (d-pad). There is a volume control dial on the right side of the device and a similar dial on the left side to adjust the contrast. At the top of the Game Boy, a sliding on-off switch and the slot for the Game Boy cartridges are located. The on-off switch includes a physical lockout to prevent users from either inserting or removing a cartridge while the unit is switched on. Nintendo recommends users leave a cartridge in the slot to prevent dust and dirt from entering the system.

The Game Boy contains optional input or output connectors. On the left side of the system is an external 3.5 mm × 1.35 mm DC power supply jack that allows users to use an external rechargeable battery pack or AC adapter (sold separately) instead of four AA batteries. The Game Boy requires 6 V DC of at least 150 mA. A 3.5 mm stereo headphone jack is located on the bottom side of the unit which allows users to listen to the audio with the bundled headphones or external speakers.

The right-side of the device offers a port which allows a user to connect to another Game Boy system via a link cable, provided both users are playing games that support connecting to each other (most often, only copies of the same game, although for example the Pokémon games can connect between different generations). The port can also be used to connect a Game Boy Printer. The link cable was originally designed for players to play head-to-head two-player games such as in Tetris. However, game developer Satoshi Tajiri later used the link cable technology as a method of communication and networking in the popular Pokémon video game series. 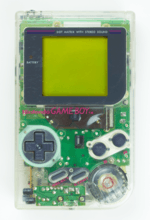 On March 20, 1995, Nintendo released several Game Boy models with colored cases, advertising them in the "Play It Loud!" campaign, known in Japan as Game Boy Bros. Specifications for this unit remain exactly the same as the original Game Boy, including the monochromatic screen. This new line of colored Game Boys set a precedent for later Nintendo handhelds; every one of them since has been available in more than one color. Play It Loud! units were manufactured in red, green, black, yellow, white, blue, and clear (transparent) or sometimes called X-Ray in the UK. Most common are the yellow, red, clear and black. Green is fairly scarce but blue and white are the rarest. Blue was a Europe and Japan only release, white was a Japanese majority release with UK Toys R Us stores also getting it as an exclusive edition to them. The white remains the rarest of all the Play it Loud colors. A rare, limited edition Manchester United Game Boy is red, with the logos of the team emblazoned on it. It was released simultaneously with the Play it Loud! handhelds in the United Kingdom. The Play It Loud's screens also have a darker border than the normal Game Boy.

Logo of the Game Boy Pocket 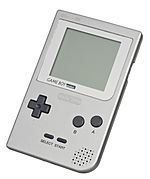 On July 21, 1996, Nintendo released the Game Boy Pocket for US$69.99: a smaller, lighter unit that required fewer batteries. It has space for two AAA batteries, which provide approximately 10 hours of gameplay. The unit is also fitted with a 3 volt, 2.35 mm x 0.75 mm DC jack which can be used to power the system. The Pocket has a smaller link port, which requires an adapter to link with the older Game Boy. The port design is used on all subsequent Game Boy models, excluding the Game Boy Micro. The screen was changed to a true black-and-white display, rather than the "pea soup" monochromatic display of the original Game Boy. Also, the Game Boy Pocket (GBP) has a larger screen than the Game Boy Color (GBC) that later superseded it. The GBP's screen has a 65 mm (2.56 in) diagonal, 48.5 mm (1.91 in) width, and 43.5 mm (1.71 in) height, compared to a 59 mm (2.32 in) diagonal for the GBC. Although like its predecessor, the Game Boy Pocket has no backlight to allow play in a darkened area, it did notably improve visibility and pixel response-time (mostly eliminating ghosting). The first version did not have a power LED. This was soon added due to public demand, along with new Game Boy Pocket units of different colors (released on April 28, 1997), some of them new to the Game Boy line. There were several limited-edition Game Boy Pockets, including a gold-metal model exclusive to Japan. The Game Boy Pocket was not a new software platform and played the same software as the original Game Boy model.

A clear 'skeleton' Famitsu edition appeared in 1997, which had only 5,000 units released, and a clear yellow edition.

Logo of the Game Boy light 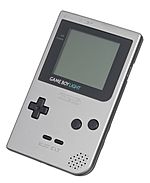 The Game Boy Light was released on April 14, 1998, and only available in Japan. Like the Game Boy Pocket, the system was also priced at ¥6,800. The Game Boy Light is only slightly bigger than the Game Boy Pocket and features an electroluminescent backlight for low-light conditions. It uses two AA batteries, which gave it approximately 20 hours with the light off and 12 with it on. It was available in two standard colors: gold and silver. It also received numerous special editions, including an Astro Boy edition with a clear case and a picture of Astro Boy on it, an Osamu Tezuka World edition with a clear red case and a picture of his characters, and a solid yellow Pokémon Center Tokyo version.

The Game Boy was released alongside six launch titles, which are listed in the table below:

All content from Kiddle encyclopedia articles (including the article images and facts) can be freely used under Attribution-ShareAlike license, unless stated otherwise. Cite this article:
Game Boy Facts for Kids. Kiddle Encyclopedia.