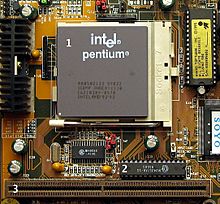 A central processing unit (CPU) is an important part of every computer. The CPU sends signals to control the other parts of the computer, almost like how a brain controls a body.

The clock rate, or speed of a CPU's internal parts, is measured in hertz (Hz). Modern processors often run so fast that gigahertz (GHz) is used instead. One GHz is 1,000,000,000 cycles per second.

Most CPUs used in desktop (home) computers are microprocessors made by either Intel or Advanced Micro Devices (usually shortened to AMD). Some other companies that make CPUs are ARM, IBM, and AMD under ATI Technologies, which is the leader right now. Most of their CPUs are used in embedded systems for more specialized things, like in mobile phones, cars, game consoles, or in the military.

In the 20th century engineers invented many different computer architectures. Nowadays most desktop computers use either 32-bit CPUs or 64-bit CPUs. The instructions in a 32-bit CPU are good at handling data that is 32 bits in size (most instructions "think" in 32 bits in a 32-bit CPU). Likewise, a 64-bit CPU is good at handling data that is 64 bits in size (and often good at handling 32-bit data too). The size of data that a CPU handles best is often called the word size of the CPU. Many old CPUs from the 70s, 80s and early 90s (and many modern embedded systems) have an 8-bit or 16-bit word size. When CPUs were invented in the middle 20th century they had many different word sizes. Some had different word sizes for instructions and data. The less popular word sizes later stopped being used.

Multi-core processors became common in the early 21st century. This means that they have many processors built on to the same chip so that they can run many instructions at once. Some processors may have up to thirty-two cores, like the AMD Epyc 7601.