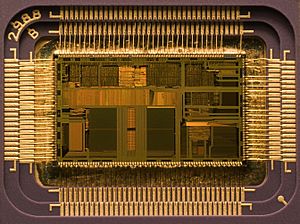 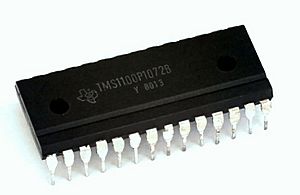 The TMS1100, by Texas instruments came out in 1974, and has been used for many applications, such as doorbells or light switches.

Microprocessors were invented in the 1970s for use in embedded systems. The majority are still used that way, in such things as mobile phones, cars, military weapons, and home appliances. Some microprocessors are microcontrollers, so small and inexpensive that they are used to control very simple products like flashlights and greeting cards that play music when opened. A few especially powerful microprocessors are used in personal computers.

All content from Kiddle encyclopedia articles (including the article images and facts) can be freely used under Attribution-ShareAlike license, unless stated otherwise. Cite this article:
Microprocessor Facts for Kids. Kiddle Encyclopedia.