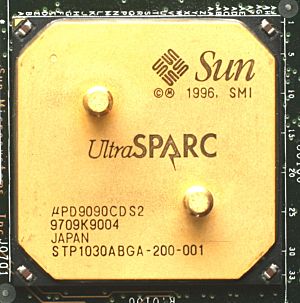 A Sun UltraSPARC, a RISC microprocessor

RISC was developed as an alternative to what is now known as CISC. However, there are CPU designs other than RISC and CISC. Some examples are VLIW, MISC, OISC, massive parallel processing, systolic array, reconfigurable computing, and dataflow architecture.

The main feature of a RISC processors is a small core logic which allows designers to increase the number of the register set and increase internal parallelism using one of the following methods:

Other features, which are typically found in RISC architectures are:

All content from Kiddle encyclopedia articles (including the article images and facts) can be freely used under Attribution-ShareAlike license, unless stated otherwise. Cite this article:
Reduced instruction set computer Facts for Kids. Kiddle Encyclopedia.