Jöns Jakob Berzelius (20 August 1779 – 7 August 1848) was a Swedish chemist. He invented the modern chemical notation. Berzelius, John Dalton and Antoine Lavoisier are said to be the fathers of modern chemistry.

Berzelius was born in the parish of Väversunda in Östergötland in Sweden. He attended the school today known as Katedralskolan. He then enrolled at Uppsala University, where he learned the profession of medical doctor from 1796 to 1801; Anders Gustaf Ekeberg, the discoverer of tantalum, taught him chemistry.

He worked as an apprentice in a pharmacy and with a physician in the Medevi mineral springs. During this time, he conducted analysis of the spring water. For his medical studies, he examined the influence of galvanic current on several diseases and graduated as M.D. in 1802. He worked as physician near Stockholm until the mine-owner Wilhelm Hisinger discovered his analytical abilities and provided him with a laboratory. Between 1808 and 1836, Berzelius worked together with Anna Sundström, who acted as his assistant. 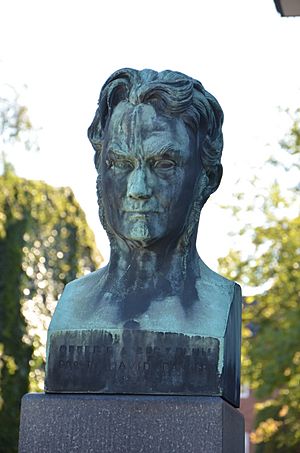 In 1807, Berzelius was appointed professor in chemistry and pharmacy at the Karolinska Institute.

Not long after going to Stockholm, Berzelius wrote a chemistry textbook for his medical students. While doing experiments for the textbook, he found that inorganic compounds are made of different elements in proportion by weight.

Based on this, in 1828, he created a table of relative atomic weights. On this table, oxygen was set to 100. The table had all of the elements known at the time. This work gave evidence of the atomic hypothesis that chemical compounds are made of atoms combined in whole number amounts.

In order to help his experiments, Berzelius created a system of chemical notation. In this notation, the elements were given simple written labels, for example, O for oxygen, or Fe for iron. The proportions of the elements was shown by numbers. This is the same basic system used today. 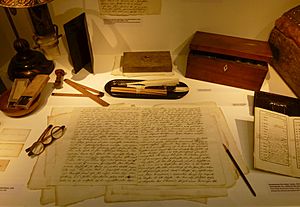 Berzelius was the first person to show the difference between organic compounds (those made with carbon), and inorganic compounds. He helped Gerhardus Johannes Mulder in his analysis of organic compounds such as coffee, tea and many proteins. The term "protein" itself was created by Berzelius, after Mulder noticed that all proteins seemed to have the same formula and might be made of a single type of a (very large) molecule. 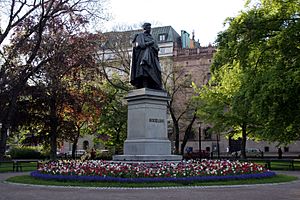 Statue of Berzelius in the center of Berzelii Park, Stockholm

In 1818 Berzelius was ennobled by King Carl XIV Johan; in 1835, at the age of 56, he married Elisabeth Poppius, the daughter of a Swedish cabinet minister, and in the same year was elevated to friherre.

Berzeliusskolan, a school situated next to his alma mater, Katedralskolan, is named for him. In 1939 his portrait appeared on a series of postage stamps commemorating the bicentenary of the founding of the Swedish Academy of Sciences.

All content from Kiddle encyclopedia articles (including the article images and facts) can be freely used under Attribution-ShareAlike license, unless stated otherwise. Cite this article:
Jöns Jacob Berzelius Facts for Kids. Kiddle Encyclopedia.