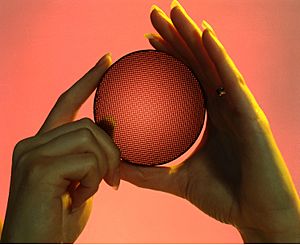 A low-temperature oxidation catalyst used to convert carbon monoxide to non-toxic carbon dioxide at room temperature. It can also remove formaldehyde from the air.

A catalyst is something which changes the rate of a chemical reaction. An example is when manganese oxide (MnO2) is added to hydrogen peroxide (H2O2), and the hydrogen peroxide starts to break up into water and oxygen. Catalysts are either of natural or synthetic origin. Catalysts are useful because they leave no residue in the solution they have sped up. A catalyst can also be used in a reaction again and again as it is not used up. There are many catalysts in our body which play an important part in many biochemical reactions. These are called enzymes. Most catalysts work by lowering the 'activation energy' of a reaction. This allows less energy to be used, thus speeding up the reaction. The opposite of a catalyst is an inhibitor. Inhibitors slow down reactions. Some of them are found in snake venom and are dangerous for our nervous system or heart.

All content from Kiddle encyclopedia articles (including the article images and facts) can be freely used under Attribution-ShareAlike license, unless stated otherwise. Cite this article:
Catalysis Facts for Kids. Kiddle Encyclopedia.