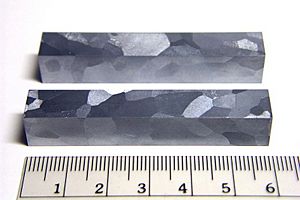 Vanadium is chemical element 23 on the periodic table. Its symbol is V. It is named after Vanadis, another name of Freyja.

Vanadium is a metal and is part of the group known as the transition metals. It is mostly used in steel where it helps strengthen the steel metal.

Vanadium is often found in aquatic forms of life. The human body may need a little bit of vanadium, but scientists are not really sure.

Vanadium can react with a variety of other elements, and the chemical compounds it forms often have beautiful colors.

The amount of vanadium in the universe is 0.0001%, making the element nearly as common as copper or zinc. Vanadium is detected by spectroscopy in light from the Sun, and sometimes in light from other stars.

Vanadium is an element that is widely distributed in Earth's crust as well as in seawater and groundwater reservoirs. Therefore it exerts great influence on the issues related to life and the environment. Vanadium is utilized by several marine organisms. For example, there are vanadate-dependent haloperoxidases in algae and several bacteria (e.g. Azotobacter) use it for nitrogen fixation and bacterial reduction involves the conversion of vanadate to oxide vanadium (IV).

With an average concentration of 35 nM, vanadium (V) (essentially present in the form of ion pairs Na+H2VO4-) is the second-to-most abundant transition metal in seawater, outclassed only by molybdenum (present as molybate MoO42-, ca. 100 nM). Vanadate-dependent haloperoxidases (VHPOs) can be present in marine brown, green, and red, algae, in (symbiotic) marine cyanobacteria, in Streptomyces bacteria, and in terrestrial fungi and lichen. Since the discovery of the first representative of these haloperoxidases and the bromoperoxidase VBrPo of the brown algae Ascophyllum nodosum, also known as wrack or pigweed, a plethora of macroalgae has been reported to have available VHPOs hence haloperoxidases that contain vanadate H2VO4- coordinated to a histidine residue in the enzyme's active center, and thus clearly distinct from the more common heme- based and non-heme peroxidases.

Changes in local redox conditions impart a significant isotopic fractionation from seawater as recorded in the local sedimentary V isotopic signature. Importantly, there is significant differences between the V isotope composition of sediments deposited in the open ocean setting with oxygen-deficient bottom waters compared to less reducing environments. Studies indicate that V is mainly delivered and enriched in anoxic sediments through settling particulates. Authigenic V isotope compositions in marine sediments are likely controlled by isotope fractionation between V species bound to particulates and dissolved in seawater, which likely varies the speciation and adsorption properties of V that are strongly controlled by local redox reactions.

Vanadium isotopes can be significantly fractionated during the delivery, cycling, and burial to the ocean. Temporal variations of 51V in seawater could be controlled by the aforementioned isotope fractionation and fluxes of various V sources and sinks to the ocean that is likely related to the global redox state of the oceans. A possible mechanism for the V isotopic offset between seawater and hydrogenous Fe-Mn crusts and nodules is the fractionation during the adsorption of V on the surface of the Fe-Mn oxyhydroxide.

Vanadium is the 22nd most common element in the Earth's crust. Metallic vanadium is rare in nature. However, vanadium compounds occur naturally in about 65 different minerals. Much of the world's vanadium production comes from vanadium-bearing magnetite found in ultramafic gabbro rocks. Vanadium is mined mostly in South Africa, north-western China, and eastern Russia. In 2013 these three countries mined more than 97% of the 79,000 tonnes of produced vanadium.

Vanadium is also in bauxite and in deposits of crude oil, coal, oil shale and tar sands.

All content from Kiddle encyclopedia articles (including the article images and facts) can be freely used under Attribution-ShareAlike license, unless stated otherwise. Cite this article:
Vanadium Facts for Kids. Kiddle Encyclopedia.