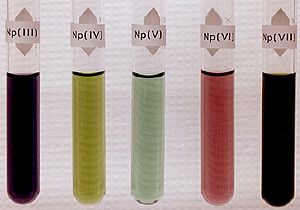 Neptunium is a chemical element that has the symbol Np on the periodic table. It has the atomic number 93 which means it has 93 protons and electrons in its atoms. It is named after the planet Neptune in the same way as Uranium is named after the planet Uranus. Neptunium was discovered in the year of 1940 by two men named Edwin McMillan and Phillip H. Abelson. Neptunium is a silvery- metallic element and is radio-active. Its melting point is 637 degrees Celsius and it's boiling point is 4000 degrees Celsius.

All content from Kiddle encyclopedia articles (including the article images and facts) can be freely used under Attribution-ShareAlike license, unless stated otherwise. Cite this article:
Neptunium Facts for Kids. Kiddle Encyclopedia.