The halogens are chemical elements under the second-to-right column in the periodic table, also known as Group 17. The elements in the group are fluorine, chlorine, bromine, iodine, astatine, and ununseptium. Halogen literally means "salt becomer", but it is often cited to mean "salt producer". They are very reactive, so they are likely to join with other elements on the left side of the periodic table to make compounds. This is due to the fact that they are missing one electron. They are rarely found alone in nature, except astatine, which is not found in nature. Fluorine is the most reactive, while iodine is the least reactive. Astatine is very radioactive and hard to get. 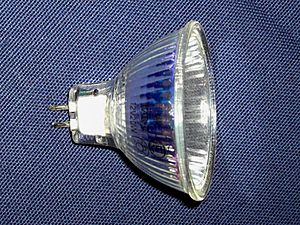 Both chlorine and bromine are used as disinfectants for drinking water, swimming pools, fresh wounds, spas, dishes, and surfaces. They kill bacteria and other potentially harmful microorganisms through a process known as sterilization. Their reactivity is also put to use in bleaching. Sodium hypochlorite, which is produced from chlorine, is the active ingredient of most fabric bleaches, and chlorine-derived bleaches are used in the production of some paper products. Chlorine also reacts with sodium to create sodium chloride, which is table salt.

Halogen lamps are a type of incandescent lamp using a tungsten filament in bulbs that have a small amounts of a halogen, such as iodine or bromine added. This enables the production of lamps that are much smaller than non-halogen incandescent lightbulbs at the same wattage. The gas reduces the thinning of the filament and blackening of the inside of the bulb resulting in a bulb that has a much greater life. Halogen lamps glow at a higher temperature (2800 to 3400 kelvins) with a whiter color than other incandescent bulbs. However, this requires bulbs to be manufactured from fused quartz rather than silica glass to reduce breakage.

All content from Kiddle encyclopedia articles (including the article images and facts) can be freely used under Attribution-ShareAlike license, unless stated otherwise. Cite this article:
Halogen Facts for Kids. Kiddle Encyclopedia.