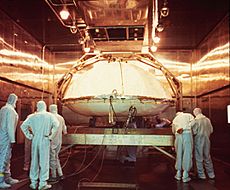 A spacecraft being prepared for dry heat sterilization

Sterilization refers to any process that removes, kills, or deactivates all forms of life (in particular referring to microorganisms such as fungi, bacteria, viruses, spores, unicellular eukaryotic organisms such as Plasmodium, etc.) and other biological agents like prions present in a specific surface, object or fluid, for example food or biological culture media.

Sterilization can be achieved through various means, including heat, chemicals, irradiation, high pressure, and filtration.

Sterilization is distinct from disinfection, sanitization, and pasteurization, in that those methods reduce rather than eliminate all forms of life and biological agents present.

After sterilization, an object is referred to as being sterile or aseptic. 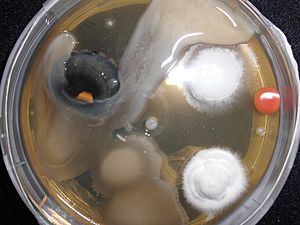 Contamination on an agar plate when not working sterile

Canning of foods by heat sterilization was an extension of the same principle. Ingestion of contaminated food and water remains a leading cause of illness and death in the developing world, particularly for children.

Food sterilization is commonly a part of canning and is used in combination with or instead of preservatives, refrigeration, and other ways to preserve food.

Heat sterilization of medical instruments is known to have been used in Ancient Rome, but it mostly disappeared throughout the Middle Ages resulting in significant increases in disability and death following surgical procedures.

Preparation of injectable medications and intravenous solutions for fluid replacement therapy requires not only a high sterility assurance level, but well-designed containers to prevent entry of adventitious agents after initial sterilization.

All content from Kiddle encyclopedia articles (including the article images and facts) can be freely used under Attribution-ShareAlike license, unless stated otherwise. Cite this article:
Sterilization (microbiology) Facts for Kids. Kiddle Encyclopedia.