Ununseptium (also named eka-astatine or just element 117) is the superheavy (very heavy), manmade chemical element with a temporary symbol Uus and atomic number 117. It is the second-most heaviest element of all, and is the second-to-last element. It is placed in group 17 in the periodic table, where the halogens are. Its properties are not yet fully known. It is probably a metalloid, but its (boiling and melting points, and first ionization energy) is expected to follow the periodic table. The discovery of ununseptium was announced in 2010 by scientists in Russia and the United States, who collaborated. It is the most recently discovered element as of 2016.

In 2004, the Joint Institute for Nuclear Research (JINR) team in Dubna, Moscow Oblast, Russia planned an experiment to synthesize (create) element 117 (it is called element 117 because the number of protons in its atom is 117). To do this, they needed to fuse the elements berkelium (element 97) and calcium (element 20). However, the American team at Oak Ridge National Laboratory, the only producer of berkelium in the world, had stopped making berkelium for a while. So, they synthesized the element 118 first using californium (element 98) and calcium.

The Russian team wanted to use berkelium because the isotope of calcium used in the experiment, calcium-48, has 20 protons and 28 neutrons. This is the lightest stable or almost stable nucleus (the middle part of an atom) with much more neutron than proton. Zinc-68 is the second-lightest nucleus of this kind, but it is heavier than calcium-48. Since ununseptium has 117 protons, they need another atom with 97 protons to be combined with the calcium atom, and berkelium has 97 protons.

In the experiment, the berkelium is made into a target and the calcium is fired in the form of a beam to the berkelium target. The calcium beam is created in Russia by removing the small amount of calcium-48 from natural calcium using chemical means. The nuclei that is made after the experiment will be heavier and is nearer to the island of stability, an idea that suggests that some very heavy atoms can be quite stable. However, as of 2013, nuclei that are heavy enough have not been created, and the isotopes that had been made often have less neutrons than the isotopes that are expected to be on the island of stability. 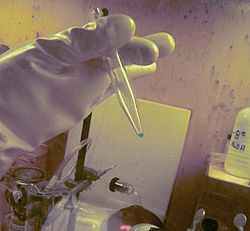 The berkelium target used for the synthesis of ununseptium, in solution form

In 2008, the American team started again the program to create berkelium, and they told the Russian team about it. The program made 22 milligrams of berkelium, and this is enough for the experiment. Soon after, the berkelium was cooled in 90 days and was made more pure by chemical means in 90 more days. The berkelium target had to be taken to Russia quickly because the half-life of the isotope of berkelium used, berkelium-249, is only 330 days. In other words, after 330 days, half of all the berkelium will no longer be berkelium. Actually, if the experiment did not start six months after the target was made, it would have been cancelled because they did not have enough berkelium for the experiment. In summer 2009, the target was packed into five lead containers and was sent by a commercial flight from New York to Moscow.

Both teams had to face the bureaucratic obstacle between America and Russia before they send the berkelium target to allow it to arrive in Russia on time. However, there were still problems: Russian customs did not let the berkelium target to get into the country twice due to missing or incomplete paperwork. Even though the target went over the Atlantic Ocean five times, the whole journey only took a few days. When the target finally got into Moscow, it was sent to Dimitrovgrad, Ulyanovsk Oblask. Here, the target was placed on a thin titanium film (layer). This film was then sent to Dubna where it was placed inside the JINR particle accelerator. This particle accelerator is the most powerful particle accelerator in the world for the creation of superheavy elements.

The experiment began in June 2009. In January 2010, the scientists at the Flerov Laboratory of Nuclear Reactions announced within the laboratory that they had succeeded in finding the decay of a new element with atomic number 117 through two decay chains of an odd-odd isotope (that does 6 alpha decays before doing a spontaneous (sudden) fission) and one decay chain of an odd-even isotope (that does 3 alpha decays before fission). On 9 April 2010, an official report was released in the Physical Review Letters journal. It showed that the isotopes that were mentioned in the decay chains were 294Uus and 293Uus. Both isotopes were made as follows:

All content from Kiddle encyclopedia articles (including the article images and facts) can be freely used under Attribution-ShareAlike license, unless stated otherwise. Cite this article:
Ununseptium Facts for Kids. Kiddle Encyclopedia.