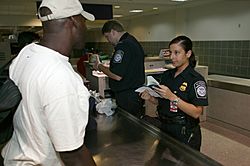 At a customs checkpoint entering into the United States

Customs is an authority or agency in a country responsible for collecting tariffs and for controlling the flow of goods, including animals, transports, personal effects, and hazardous items, into and out of a country. The movement of people into and out of a country is normally monitored by immigration authorities, under a variety of names and arrangements. The immigration authorities normally check for appropriate documentation, verify that a person is entitled to enter the country, apprehend people wanted by domestic or international arrest warrants, and impede the entry of people deemed dangerous to the country.

Each country has its own laws and regulations for the import and export of goods into and out of a country, which its customs authority enforces. The import or export of some goods may be restricted or forbidden. In most countries, customs are attained through government agreements and international laws. A customs duty is a tariff or tax on the importation (usually) or exportation (unusually) of goods. Commercial goods not yet cleared through customs are held in a customs area, often called a bonded store, until processed. All authorized ports are recognized customs areas.

At airports, customs is the point of no return for all passengers, once a passenger has cleared customs, they cannot go back. 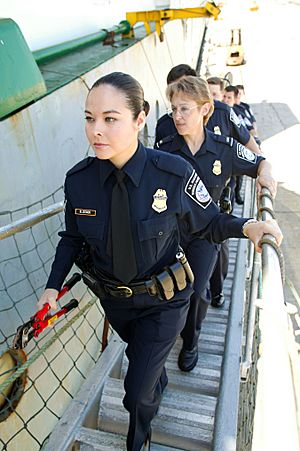 Officers from US Customs and Border Protection boarding a ship

In many countries, customs procedures for arriving passengers at many international airports and some road crossings are separated into red and green channels. Passengers with goods to declare (carrying goods above the permitted customs limits and/or carrying prohibited items) go through the red channel. Passengers with nothing to declare (carrying goods within the permitted customs limits and not carrying prohibited items) go through the green channel. However, entry into a particular channel constitutes a legal declaration, if a passenger going through the green channel is found to be carrying goods above the customs limits or prohibited items, he or she may be prosecuted for making a false declaration to customs, by virtue of having gone through the green channel. Each channel is a point of no return, once a passenger has entered a particular channel, they cannot go back.

Australia, Canada, New Zealand, and the United States do not officially operate a red and green channel system; however, some airports copy this layout.

All content from Kiddle encyclopedia articles (including the article images and facts) can be freely used under Attribution-ShareAlike license, unless stated otherwise. Cite this article:
Customs Facts for Kids. Kiddle Encyclopedia.