Island of stability facts for kids

The chemical elements beyond uranium are radioactive, and they do not have stable isotopes. This means that they will decay into other elements. Except for Plutonium, their half life is in the order of several minutes, to seconds. There is a theory in physics that says that after a number of elements with short half lives, there will be others with longer half lives. These are generally known as Islands of stability. These elements are expected to have isotopes with half lives in the range of several minutes. The hypothesis is that the atomic nucleus is built up in "shells" in a manner similar to the structure of the much larger electron shells in atoms. In both cases, shells are just groups of quantum energy levels that are relatively close to each other. Energy levels from quantum states in two different shells will be separated by a relatively large energy gap. So when the number of neutrons and protons completely fills the energy levels of a given shell in the nucleus, the binding energy per nucleon will reach a local maximum and thus that particular configuration will have a longer lifetime than nearby isotopes that do not possess filled shells.

A filled shell would have "magic numbers" of neutrons and protons. One possible magic number of neutrons for spherical nuclei is 184, and some possible matching proton numbers are 114, 120 and 126 – which would mean that the most stable spherical isotopes would be ununquadium-298, unbinilium-304 and unbihexium-310. Of particular note is Ubh-310, which would be "doubly magic" (both its proton number of 126 and neutron number of 184 are thought to be magic) and thus the most likely to have a very long half-life. (The next lighter doubly magic spherical nucleus is lead-208, the heaviest stable nucleus and most stable heavy metal.)

Recent research indicates that large nuclei are deformed, causing magic numbers to shift. Hassium-270 is now believed to be a doubly magic deformed nucleus, with deformed magic numbers 108 and 162. However, it has a half-life of only 3.6 seconds.

Isotopes have been produced with enough protons to plant them upon an island of stability but with too few neutrons to even place them upon the island's outer "shores". It is possible that these elements possess unusual chemical properties and, if they have isotopes with adequate lifespans, would be available for various practical applications (such as particle accelerator targets and as neutron sources as well). 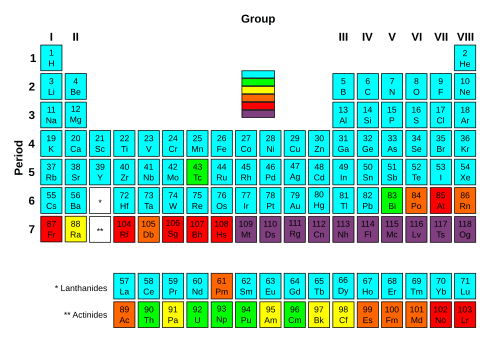 All content from Kiddle encyclopedia articles (including the article images and facts) can be freely used under Attribution-ShareAlike license, unless stated otherwise. Cite this article:
Island of stability Facts for Kids. Kiddle Encyclopedia.