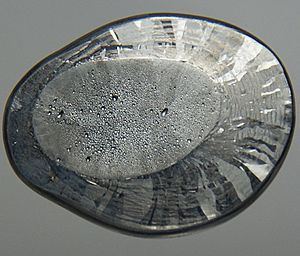 Lead (pronounce: "lehd") is a chemical element. Its chemical symbol is Pb, which comes from plumbum, the Latin word for lead. Its atomic number is 82, atomic mass is 207.2 and has a melting point of 327.8°C. It is a very poisonous and heavy metal. 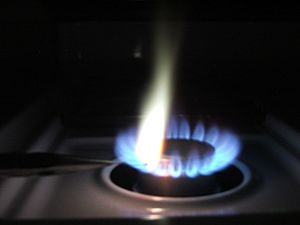 Lead is a shiny, gray-blue poor metal. It gets tarnished easily to a dull gray color. It is soft and malleable. It is very shiny when it is melted. It is very heavy. It is very corrosion-resistant. It is made stronger by adding antimony or calcium. It can form an alloy with sodium. It is toxic to people and animals when swallowed.

This state is more common than the +4 state. These are weak oxidizing agents. All but the oxides are colorless or white.

These are less common. They are strong oxidizing agents.

Lead is found very rarely in the earth's crust as a metal. Normally, lead is in the mineral galena. Galena is lead sulfide. Galena is the main lead ore.

Lead was used for thousands of years because it is easy to get from the ground and easy to shape and work with. The Romans used lead very commonly. They used it for pipes, drinking vessels, and fasteners.

Lead is made from galena. Galena is made pure by froth flotation to get all the impurities out. Then the lead sulfide is roasted in a furnace to make lead(II) oxide. The lead(II) oxide is heated with coke to make liquid lead metal. 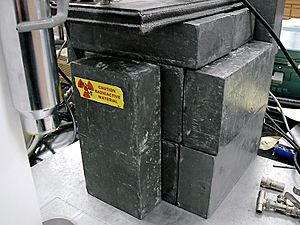 The dark bricks are made of lead. They are meant to keep people safe from the radioactive material inside.

Lead is used in the ballast of sailboats. It is also used in weight belts for scuba diving. It is also used to make shotgun pellets and bullets for small arms. Some printing presses use lead type because it can be easily shaped. It can be used outside because it does not corrode in water.

Most lead is used in lead acid batteries, though. The lead is oxidized, making electricity. Sheets of lead are used to block sound in some places. Lead is used in radiation shielding. Molten lead can be used as a coolant in nuclear reactors. It used to be mixed with tin to make the pipes in pipe organs. Different amounts of lead make different sounds. In addition, lead has found its usage in solder.

It is used in some solder. It is used in covering for wires that carry high voltage. Some tennis rackets have lead in them to make them heavier. It is used to balance wheels of cars, to make statues, and to make decorative looks in buildings.

Lead was used in many red, yellow, and white pigments in paints. Lead was also used in pesticides. Lead used to be used in pipes carrying water, but now it is not because lead can leach into the water.

Although it can be safely touched, exposure to lead should be avoided – it is very toxic to humans and other animals when swallowed, and its use is restricted in many countries.

If someone is exposed to lead for a long time, it ruins their kidneys and gives them abdominal pains. Lead also ruins the nervous system. Lead paint was being eaten by children and they were getting lead poisoning.

The best way to understand lead and its properties is to read its MSDS.

All content from Kiddle encyclopedia articles (including the article images and facts) can be freely used under Attribution-ShareAlike license, unless stated otherwise. Cite this article:
Lead Facts for Kids. Kiddle Encyclopedia.