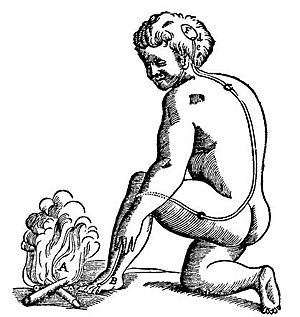 Illustration of how pain travels to the brain, from René Descartes's Treatise of Man

The nervous system is a body system which sends signals around the body. It lets animals respond to what is around them. The central nervous system is the brain, the spinal cord, and nerves. It is present in almost all animals. It is there to process the input from the senses, and to to coordinate movement.

The nervous system is made up of neurons. Other cells, such as glial cells keep the neurons safe and healthy.

The structure of the system includes the brain and spinal cord, which together are called the central nervous system. The brain has billions of nerve cells to help think, walk, and breathe. The nervous system can react in 1/100 of a second to a stimulus, like a pain signal.

The system of nerves in your body that sends messages for controlling movement and feeling between the brain and the other parts of the body anatomy of nervous systems can be sub-divided as follows:

All content from Kiddle encyclopedia articles (including the article images and facts) can be freely used under Attribution-ShareAlike license, unless stated otherwise. Cite this article:
Nervous system Facts for Kids. Kiddle Encyclopedia.