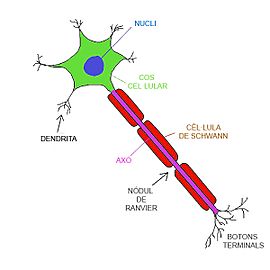 The axon is the part of a neuron that sends the signal. Axons are long, thin and tendril-like.

The axon carries an electrical signal from the cell body (soma) to the synapse. There the signal passes to other neurons or to muscle fibers. An axon can be over a meter long in humans. Or even longer in longer animals like elephants and whales.

The electrical signal of an axon is made by ions that flow in and out of the cell in a chain reaction producing an electric impulse called an action potential. The speed at which the signal travels depends on how thick the axon is, and how much insulation it has. Insulation is provided by specialized cells called myelin that wrap around the axon. Together this insulation is called the myelin sheath.

The axon was discovered by Otto Deiters.

All content from Kiddle encyclopedia articles (including the article images and facts) can be freely used under Attribution-ShareAlike license, unless stated otherwise. Cite this article:
Axon Facts for Kids. Kiddle Encyclopedia.