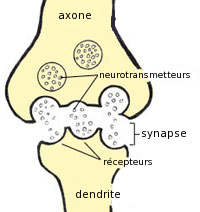 Neurotransmitters are transported within neurons by small "sacks" called vesicles. When these vesciles come into contact with the neuron's cell membrane, it opens. This releases the neurotransmitters into the synaptic cleft. 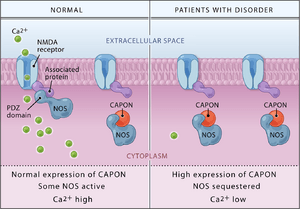 Until the early 20th century, scientists assumed that the majority of synaptic communication in the brain was electrical. However, through the careful histological examinations by Ramón y Cajal (1852–1934), a 20 to 40 nm gap between neurons, known today as the synaptic cleft, was discovered. The presence of the gap suggested chemical messengers moved across the synaptic cleft. In 1921 German pharmacologist Otto Loewi (1873–1961) confirmed that neurons can communicate by releasing chemicals. By experiments involving the vagus nerves of frogs, Loewi was able to slow the heart rate of frogs by controlling the amount of saline solution present around the vagus nerve.

Loewi asserted that sympathetic regulation of cardiac function can be mediated through changes in chemical concentrations. Otto Loewi also discovered acetylcholine (ACh)—the first known neurotransmitter. Some neurons do, however, communicate by electrical synapses through the use of gap junctions, which allow specific ions to pass directly from one cell to another.

All content from Kiddle encyclopedia articles (including the article images and facts) can be freely used under Attribution-ShareAlike license, unless stated otherwise. Cite this article:
Neurotransmitter Facts for Kids. Kiddle Encyclopedia.