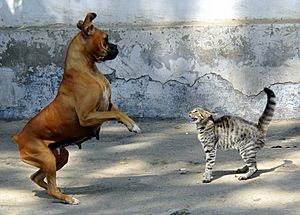 The fight-or-flight response (or acute stress response) is a set of physiological changes that occur when an animal is threatened. The changes include increased heart rate, breathing rate and blood pressure.

This response was first described by W.B Cannon. He found that animals react to threats with a general discharge of the sympathetic nervous system. This leads to changes such as those mentioned above. The changes prepare the animal for fighting or fleeing. This response is the first stage of a general adaptation that regulates stress responses among vertebrates and other organisms.

The fight or flight response lets animals respond quickly to threats. This system is universal in vertebrates. That shows it is ancient in origin, and very important.

Humans have some problems with the system, because though they share the physiology with other animals, they rarely face a clear-cut fight or flight choice. Humans can try to talk their way through various problems and semi-threats, but they may suffer stress when the issues are not easily solved.

All content from Kiddle encyclopedia articles (including the article images and facts) can be freely used under Attribution-ShareAlike license, unless stated otherwise. Cite this article:
Fight or flight response Facts for Kids. Kiddle Encyclopedia.