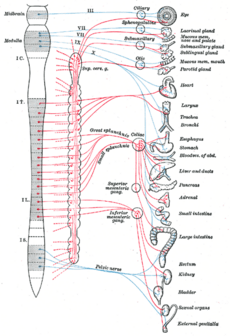 The Autonomic nervous system controls all automatic actions. That means most of its activities are done without the person having conscious control over them. The person usually cannot feel what the ANS is doing. However, some of the ANS's activities work together with the conscious mind, like breathing.

The Autonomic nervous system controls many different things, like heart rate, digestion, respiration rate, salivation, perspiration, diameter of the pupils and the discharge of urine.

There are two different sections within the ANS: 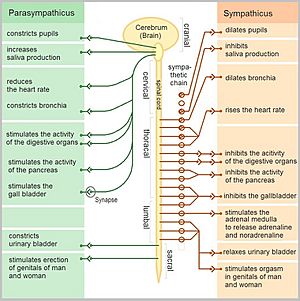 Function of the autonomic nervous system

Promotes a fight-or-flight response, corresponds with arousal and energy generation, and inhibits digestion.

All content from Kiddle encyclopedia articles (including the article images and facts) can be freely used under Attribution-ShareAlike license, unless stated otherwise. Cite this article:
Autonomic nervous system Facts for Kids. Kiddle Encyclopedia.