The Republic of Senegal (French République da Sénégal) is a country in West Africa. The capital is Dakar. Senegal covers a land area of almost 197,000 square kilometres. It has population of about 13 million. The climate is tropical with two seasons: the dry season and the rainy cold season . Senegal was given independence by France in 1960.

French is the official language. Since April 2012 Senegal's president has been Macky Sall.

In the 15th century, Portuguese people came to Gorée Island off the coast of Dakar. In the 17th century, French people and Dutch people came there, too. These European countries used the island as a trading post in slaves from the mainland, controlled by the Muslim Wolof Empires. Slavery was later made illegal by France, but soon after, around 1850, the French started to conquer the Wolof. By 1902 Senegal was a part of the French colony French West Africa.

In January 1959, Senegal and the French Sudan became one to form the Mali Federation, which became fully independent on June 20, 1960, as a result of the independence and transfer of power agreement signed with France on April 4, 1960. This did not last long and Senegal and Mali broke apart into separate nations. Between 1982 and 1989 Senegal and The Gambia joined together to make Senegambia. 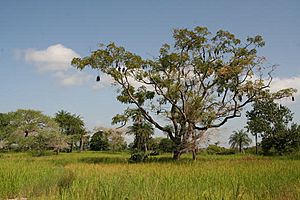 Senegal is located on the west of the African continent. It lies between latitudes 12° and 17°N, and longitudes 11° and 18°W.

Senegal is externally bounded by the Atlantic Ocean to the west, Mauritania to the north, Mali to the east, and Guinea and Guinea-Bissau to the south; internally it almost completely surrounds The Gambia, namely on the north, east and south, except for Gambia's short Atlantic coastline.

The Senegalese landscape consists mainly of the rolling sandy plains of the western Sahel which rise to foothills in the southeast. Here is also found Senegal's highest point, an otherwise unnamed feature 2.7 km southeast of Nepen Diakha at 648 m (2,126 ft). The northern border is formed by the Senegal River; other rivers include the Gambia and Casamance Rivers. The capital Dakar lies on the Cap-Vert peninsula, the westernmost point of continental Africa.

The Cape Verde islands lie some 560 kilometres (350 mi) off the Senegalese coast, but Cap-Vert ("Cape Green") is a maritime placemark, set at the foot of "Les Mammelles", a 105-metre (344 ft) cliff resting at one end of the Cap-Vert peninsula onto which is settled Senegal's capital Dakar, and 1 kilometre (0.6 mi) south of the "Pointe des Almadies", the westernmost point in Africa. 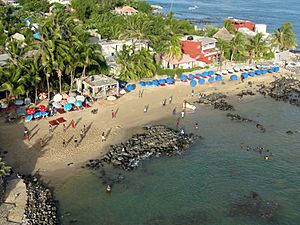 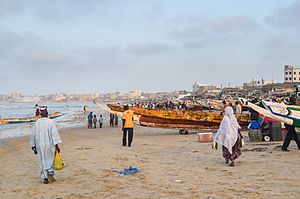 The main industries include food processing, mining, cement, artificial fertilizer, chemicals, textiles, refining imported petroleum, and tourism. Exports include fish, chemicals, cotton, fabrics, groundnuts, and calcium phosphate. The principal foreign market is India with 26.7% of exports (as of 1998). Other foreign markets include the United States, Italy and the United Kingdom.

All content from Kiddle encyclopedia articles (including the article images and facts) can be freely used under Attribution-ShareAlike license, unless stated otherwise. Cite this article:
Senegal Facts for Kids. Kiddle Encyclopedia.