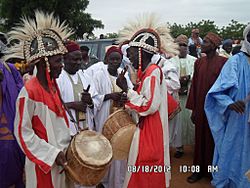 A griot or Jeli is a West African historian, storyteller, musician, genealogist, spokesperson, diplomat, teacher, praise-singer and more. There is really no word in the English language that fully explains what a Griot does. Not every griot does all these things, but these are some examples of what their function is.

A griot was a public servant, an artist, and a royal counselor. His fate depended on the prosperity and survival of the king or queen he served. He preserved the oral history of his tribe or people. In the Caribbean and the Americas he was the link to their African culture and history. The griot was the only person that could keep their past history in Africa alive. Troubadour and poet, diplomat and diviner only begin to describe his functions. Each clan, village, and warrior-family had a griot. They kept track of all births, marriages, deaths, battles and other tribal histories. Griots were also said to have the ability to see one's future. They could memorize the history of every member of a clan or tribe going back for centuries.

Who could become a griot

The position of a griot was traditionally passed down from father to son. A griot was born into and trained by a griot family. For those not born into griot families, sometimes there was a master griot who taught the arts associated with the position. Today there are state-sponsored and private schools that teach griot arts. But they focus on the musical aspects and not the verbal skills.

All content from Kiddle encyclopedia articles (including the article images and facts) can be freely used under Attribution-ShareAlike license, unless stated otherwise. Cite this article:
Griot Facts for Kids. Kiddle Encyclopedia.