Mali is a landlocked country (a country entirely enclosed by land) in West Africa. Mali borders Algeria to the north, Niger on the east, Burkina Faso and the Côte d'Ivoire on the south, Guinea on the south-west, and Senegal and Mauritania on the west. Physical features of Mali include the Sahara desert in the north, with the Niger River and Sénégal River in the southern part of the country. As of a July 2011 estimate, Mali has a population of approximately 14,000,000 people. Mali has a total area of 1,220,190 square kilometres (471,120 sq mi). Most of the people live in the southern part of the country, with Mali's capital and most populated city being Bamako.

Mandé people founded several kingdoms in Sahel. This was a big area that includes Mali. These kingdoms included the Ghana Empire, the Mali Empire, and the Songhai Empire. Timbuktu was an important city in these empires because a lot of trade across the Sahara Desert went there. Timbuktu was also a good place for learning. The Songhai Empire became smaller after a Moroccan attack in 1591.

France invaded Mali in 1880. After that, France owned Mali. The colony's names were French Sudan and the Sudanese Republic. At some times it also included other nearby countries. In early 1959, Mali and Senegal united and they became the Mali Federation. This became independent from France on June 20, 1960. Senegal left the Mali Federation a few months later. The Republic of Mali, with Modibo Keïta as the first president, left the French Community on September 22, 1960.

There was a coup in Mali in 1968. Modibo Keïta lost his job and was put in prison. Mali was then ruled by Moussa Traoré until 1991. There was another coup in 1991 after protests against the government, and a new constitution was made. The leader of the country was then Amadou Toumani Touré. In 1992, Alpha Oumar Konaré won Mali's first democratic election. President Konaré won again in 1997 and he made big political and economic changes. In 2002, Amadou Toumani Touré won the election and he started his second term as head of state. He was a retired general and he had been the military leader of the 1991 coup. Today, Mali is one of the most politically and socially stable countries in Africa. 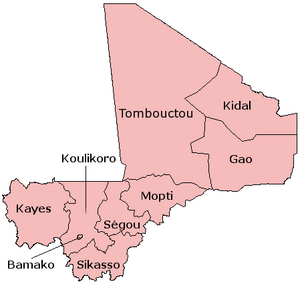 Mali is divided into 8 regions and 1 district. The country is further divided into 49 cercles, containing 288 "arrondissements" and 703 communes.

The regions and district are: 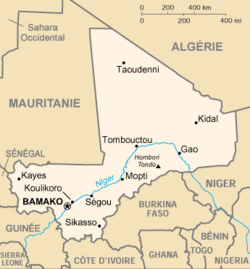 Mali is landlocked; it has no access to sea. It has dry weather. It does not have many mountains. There are flat areas in the north, which are covered by sand, and there is savanna around the Niger River in the south. Most of Mali is in the Sahara Desert, so there is a hot, dusty haze in dry seasons. There are many natural resources in Mali, including Gold, uranium, phosphates, kaolinite, salt and limestone. 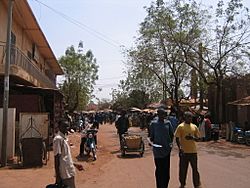 Mali is one of the poorest countries in the world. 65% of its land area is desert or something similar. There were several long droughts there over the last hundred years. Therefore, most economic activity is near the Niger River. About 10% of the people are nomads and 80% of workers have jobs in farming and fishing. Industry is mainly to process farm products. Women also do pottery and the pots are bought and taken to markets. Many foreign tourists like the traditional methods which the women use to make the pots. Mali's main export is cotton, so if the price of cotton changes, Mali's economy is affected a lot. Mali also receives a lot of financial help from other countries. In 1997, the International Monetary Fund (IMF) recommended a programme for changing the economy and the government followed this. Several international companies started digging for larger amounts of gold in 1996-1998, and the government thinks that Mali will become an important gold exporter soon. 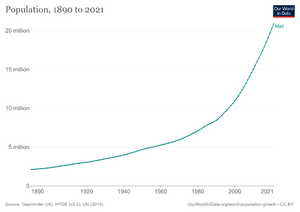 Malinese people are from the racial groups below.

The religions below are followed in Mali. 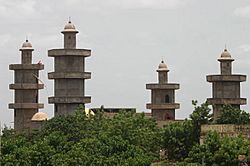 Mosque being built in Bamako

About 90% of people from Mali follow Sunni Islam, but they do not always forget their traditional religions. Muslims have their own schooling system. The number of Muslims from Mali who travel to Mecca is increasing and some study in Arab countries. About 1% of the people are Christians. When Mali was under French control, Christian missionaries were sent to Islamic areas.

The language of Mali under French rule was French, but now not many people outside towns can read or write this language. However, about 60% of the people use other languages well. Many people can read and write in Bamanakan (the most popular spoken language). This language has its own alphabet, called N'Ko. Other people can read and write in Arabic, after going to an Islamic school. One of the oldest universities in the world is Sankore University in Timbuktu. It began in the 1400s.

All content from Kiddle encyclopedia articles (including the article images and facts) can be freely used under Attribution-ShareAlike license, unless stated otherwise. Cite this article:
Mali Facts for Kids. Kiddle Encyclopedia.