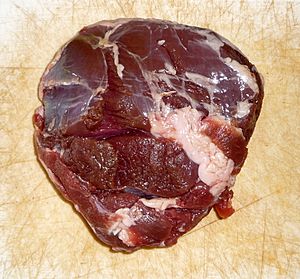 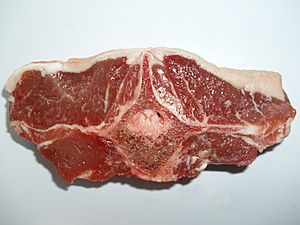 Lamb, hogget and mutton are the meat of domestic sheep at different ages.

A sheep in its first year is called a lamb, and its meat is also called lamb. The meat of a juvenile sheep older than one year is hogget; outside the USA this is also a term for the living animal. The meat of an adult sheep is mutton, a term only used for the meat, not the living animals. In the Indian subcontinent the term mutton is also used to refer to goat meat.

Lamb is the most expensive of the three types, and in recent decades sheep meat is increasingly only retailed as "lamb", sometimes stretching the accepted distinctions given above.

The stronger-tasting mutton is now hard to find in many areas, despite the efforts of the Mutton Renaissance Campaign in the UK. In Australia, the term prime lamb is often used to refer to lambs raised for meat. Other languages, for example French, Spanish, Italian and Arabic, make similar, or even more detailed, distinctions between sheep meat by age and sometimes by gender and diet, though these languages do not always use different words to refer to the animal and its meat — for example, lechazo in Spanish refers to meat from milk-fed (unweaned) lambs. 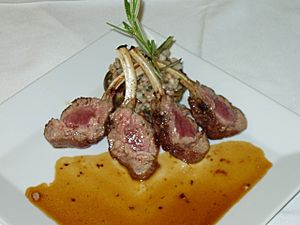 The definitions for lamb, hogget and mutton vary considerably between countries. Younger lambs are smaller and more tender. Mutton is meat from a sheep over two years old, and has less tender flesh. In general, the darker the colour, the older the animal. Baby lamb meat will be pale pink, while regular lamb is pinkish-red. 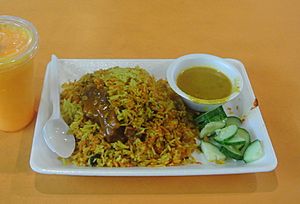 The term "mutton" is applied to goat meat in most of these countries, and the goat population has been rising. For example, mutton-curry is always made from goat meat. It is estimated that over one-third of the goat population is slaughtered every year and sold as mutton. The husbanded sheep population in India and the Indian subcontinent has been in decline for over 40 years and has survived at marginal levels in mountainous regions, based on wild-sheep breeds, and mainly for wool production. 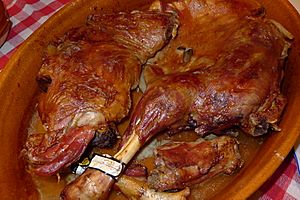 Lechazo asado (roast lamb), shown above, is a typical dish from the province of Valladolid and others castilian provinces in Spain. 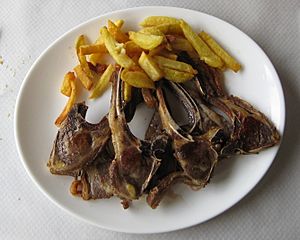 Chuletillas of milk-fed lamb in Asturias. 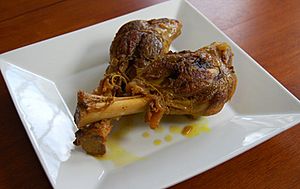 Lamb shanks of a young lamb. 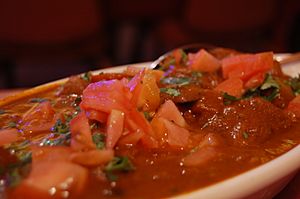 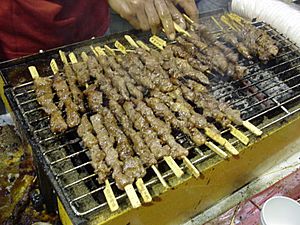 Hogget and mutton have a stronger flavour than lamb because they contain a higher concentration of species-characteristic fatty acids and are preferred by some. Mutton and hogget also tend to be tougher than lamb and are therefore better suited to casserole-style cooking, as in Lancashire hotpot, for example.

Leg of lamb is a whole leg; saddle of lamb is the two loins with the hip. Leg and saddle are usually roasted, though the leg is sometimes boiled.

Forequarter meat of sheep, as of other mammals, includes more connective tissue than some other cuts, and, if not from a young lamb, is best cooked slowly using either a moist method, such as braising or stewing, or by slow roasting or American barbecuing. It is, in some countries, sold already chopped or diced.

Mutton barbeque is a tradition in Western Kentucky. The area was strong in the wool trade, which gave them plenty of older sheep that needed to be put to use.

Thin strips of fatty mutton can be cut into a substitute for bacon called macon.

Lamb tongue is popular in Middle Eastern cuisine both as a cold cut and in preparations like stews. 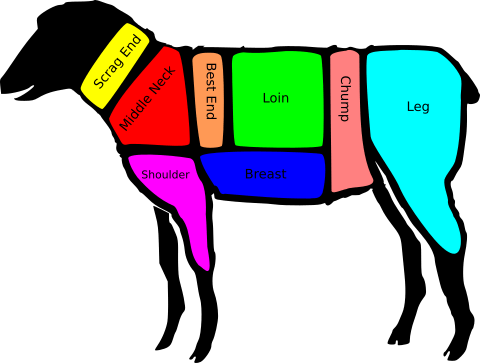 Approximate zones of the usual UK cuts of lamb:

All content from Kiddle encyclopedia articles (including the article images and facts) can be freely used under Attribution-ShareAlike license, unless stated otherwise. Cite this article:
Mutton Facts for Kids. Kiddle Encyclopedia.