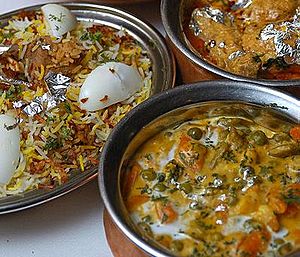 Biryani, biriani, beryani or beriani is a set of rice-based foods made with spices, rice (usually basmati) and meat, fish, eggs or vegetables. The name comes from the Persian word beryā(n) which means "fried" or "roasted".

The cooking method of Biryani came from Iran. It was brought to the Indian subcontinent by Iranian travelers and merchants. In India, the recipe of biryani developed to its current form. Local variants of this dish are popular not only in South Asia but also in Pakistan, Southeast Asia, Arabia, and within various South Asian communities in Western countries.

The spices and condiments used in biryani may include, but are not limited to, ghee, nutmeg, mace, cumin, pepper, cloves, cardamom, cinnamon, bay leaves, coriander, mint leaves, ginger, onions, and garlic. The premium varieties include saffron. For a non-vegetarian biryani, the main ingredient with the spices is the meat—beef, chicken, goat, lamb, fish or shrimp. The dish may be served with dahi chutney or Raita, korma, curry, a sour dish of eggplant (brinjal), boiled egg and salad.

Biryani and pullao are different. In biryani the rice (plain or fried) is cooked separately from the thick sauce (curry of meat or vegetables). The curry and the rice are then brought together and layered. This makes a dish with contrasting flavors of flavored rice and strongly flavored sauce and meat or vegetables.

All content from Kiddle encyclopedia articles (including the article images and facts) can be freely used under Attribution-ShareAlike license, unless stated otherwise. Cite this article:
Biryani Facts for Kids. Kiddle Encyclopedia.