Cumin; sometimes spelled cummin; Cuminum cyminum), also known as zeera, is a flowering plant in the family Apiaceae, native from the east Mediterranean to India. Its seeds (each one contained within a fruit, which is dried) are used in the cuisines of many different cultures, in both whole and ground form. In addition, it is also used as a medicinal plant, serving as a digestant, as well as being used to treat anemia and the common cold. 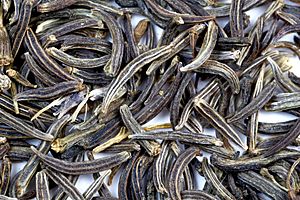 Each branch has two to three sub-branches. All the branches attain the same height, therefore the plant has a uniform canopy. The stem is coloured grey or dark green. Cumin seeds resemble caraway seeds, being oblong in shape and yellow-brown in colour, like other members of the family such as caraway, parsley and dill.

Cumin's distinctive flavour and strong, warm aroma are due to its essential oil content. 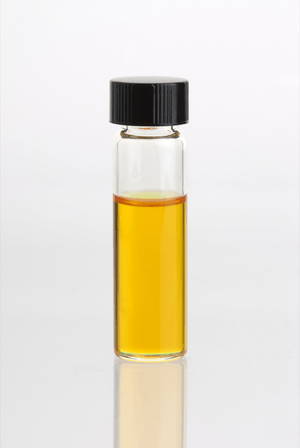 Cumin has been in use since ancient times. Seeds excavated in India have been dated to the second millennium BC. They have also been reported from several New Kingdom levels of ancient Egyptian archaeological sites. In the ancient Egyptian civilization cumin was used as spice and as preservative in mummification.

Originally cultivated in Iran and the Mediterranean region, cumin is mentioned in the Bible in both the Old Testament (Isaiah 28:27) and the New Testament (Matthew 23:23). The ancient Greeks kept cumin at the dining table in its own container (much as pepper is frequently kept today), and this practice continues in Morocco. Cumin was also used heavily in ancient Roman cuisine. In India, it has been used for millennia as a traditional ingredient of innumerable kormas, masalas, and soups, and forms the basis of many other spice blends.

Cumin was introduced to the Americas by Spanish and Portuguese colonists. There are several different types of cumin but the most famous ones are black and green cumin, both of which are used in Persian cuisine.

The main producer and consumer of cumin is India. It produces 70% of the world production and consumes 90% of its own production (which means that India consumes 63% of the world's cumin). Other producers are Syria (7%), Turkey (6%) and Iran (6%). The remaining 11% comes from other countries. In total, Around 300,000 tons of cumin per year are produced worldwide. In 2007, India produced around 175,000 tons of cumin on an area of about 410,000 ha. I.e. the average yield is 0.43 tons per hectare. Cumin is a drought tolerant, tropic or semi-tropic crop. Its origin is most probably Egypt, Turkmenistan and the east Mediterranean. Cumin has a short growth season of 100 – 120 days. 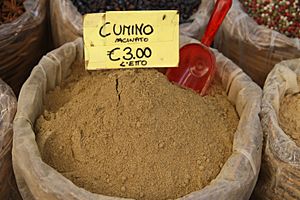 Ground cumin on display at the market in Ortigia, Syracuse (Italy)

Cumin seeds are used as a spice for their distinctive flavour and aroma. It is globally popular and an essential flavouring in many cuisines, particularly South Asian, Northern African and Latin American cuisines. Cumin can be found in some cheeses, such as Leyden cheese, and in some traditional breads from France. It is commonly used in traditional Brazilian cuisine. Cumin can be an ingredient in chili powder (often Tex-Mex or Mexican-style).

Cumin can be used ground or as whole seeds. It helps to add an earthy and warming feeling to food, making it a staple in certain stews and soups, as well as spiced gravies such as chili. It is also used as an ingredient in some pickles and pastries.

In Sanskrit, cumin is known as Jira “that which helps digestion". In the Ayurvedic system, dried cumin seeds are used for medicinal purposes. These seeds are powdered and used in different forms like kashaya (decoction), arishta (fermented decoction), vati (tablet/pills), and processed with ghee (a semi-fluid clarified butter).

It is used internally and sometimes for external applications, also. It enhances the appetite, taste perception, digestion, vision, strength, and lactation. It is used to in the treatment of fever, loss of appetite, diarrhea, vomiting, abdominal distension, edema and puerperal disorders.

In southern India, popular drinks such as Kerala and Tamil Nadu are called jira water, which is made by boiling cumin seeds. It is believed that cumin is beneficial for heart disease, swellings, tastelessness, vomiting, poor digestion and chronic fever. Although cumin seeds contain a relatively large percentage of iron, extremely large quantities of cumin would need to be consumed for it to serve as a significant dietary source.

All content from Kiddle encyclopedia articles (including the article images and facts) can be freely used under Attribution-ShareAlike license, unless stated otherwise. Cite this article:
Cumin Facts for Kids. Kiddle Encyclopedia.