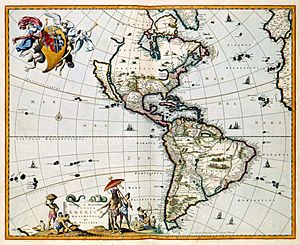 Map from a time when a few places remained unknown

The Americas (or America) are lands in the Western Hemisphere that are also known as the New World. Comprising the continents of North America and South America, along with their associated islands, they cover 8.3% of the Earth's total surface area (28.4% of its land area).

Most people consider the countries in Central America to be part of North America instead of South America.

While the word American is usually used to mean a person or a thing from the United States of America, the most populated country in the Americas, sometimes people and things from anywhere in the Americas are called "American".

All content from Kiddle encyclopedia articles (including the article images and facts) can be freely used under Attribution-ShareAlike license, unless stated otherwise. Cite this article:
Americas Facts for Kids. Kiddle Encyclopedia.