Kids Encyclopedia Facts
This page is about the city. For the state, see São Paulo (state).

São Paulo is a municipality in the Southeast Region of Brazil. The metropolis is an alpha global city (as listed by the GaWC) and the most populous city in Brazil, the Western Hemisphere and the Southern Hemisphere, besides being the largest Portuguese-speaking city in the world. The municipality is also the world's 12th largest city proper by population. The city is the capital of the surrounding state of São Paulo, the most populous and wealthiest state in Brazil. It exerts strong international influences in commerce, finance, arts and entertainment.

The name of the city honors the Apostle, Saint Paul of Tarsus. The city's metropolitan area, the Greater São Paulo, ranks as the most populous in Brazil and the 12th most populous on Earth. The process of conurbation between the metropolitan areas located around the Greater São Paulo (Campinas, Santos, Sorocaba and the Paraíba Valley) created the São Paulo Macrometropolis, a megalopolis with more than 30 million inhabitants, one of the most populous urban agglomerations in the world.

Having the largest economy by GDP in Latin America and the Southern Hemisphere, the city is home to the São Paulo Stock Exchange. Paulista Avenue is the economic core of São Paulo. The city has the 11th largest GDP in the world, representing alone 10.7% of all Brazilian GDP and 36% of the production of goods and services in the state of São Paulo, being home to 63% of established multinationals in Brazil, and has been responsible for 28% of the national scientific production in 2005.

The metropolis is also home to several of the tallest skyscrapers in Brazil, including the Mirante do Vale, Edifício Itália, Banespa, North Tower and many others. The city has cultural, economic and political influence both nationally and internationally. It is home to monuments, parks and museums such as the Latin American Memorial, the Ibirapuera Park, Museum of Ipiranga, São Paulo Museum of Art, and the Museum of the Portuguese Language. The city holds events like the São Paulo Jazz Festival, São Paulo Art Biennial, the Brazilian Grand Prix, São Paulo Fashion Week, the ATP Brasil Open, the Brasil Game Show and the Comic Con Experience. The São Paulo Gay Pride Parade rivals the New York City Pride March as the largest gay pride parade in the world.

São Paulo is a cosmopolitan, melting pot city, home to the largest Arab, Italian, Japanese, and Portuguese diasporas, with examples including ethnic neighborhoods of Mercado, Bixiga, and Liberdade respectively. São Paulo is also home to the largest Jewish population in Brazil, with about 75,000 Jews. In 2016, inhabitants of the city were native to over 200 different countries. People from the city are known as paulistanos, while paulistas designates anyone from the state, including the paulistanos. The city's Latin motto, which it has shared with the battleship and the aircraft carrier named after it, is Non ducor, duco, which translates as "I am not led, I lead."

The city, which is also colloquially known as Sampa or Terra da Garoa (Land of Drizzle), is known for its unreliable weather, the size of its helicopter fleet, its architecture, food, severe traffic congestion and skyscrapers.

São Paulo was one of the host cities of the 1950 and the 2014 FIFA World Cup. Additionally, the city hosted the IV Pan American Games and the São Paulo Indy 300. 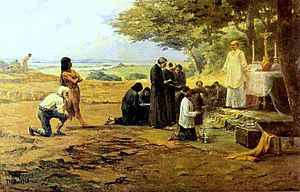 The first people moved to the region in 1560, when São Paulo became a village.

Because São Paulo was a poor village and was far away from the colony centre, the bandeirantes (explorers) chose it to start expeditions to enslave natives, recapture runaway slaves, and to find precious metals and stones (gold, diamonds, etc.).

In 1711, São Paulo became a city. In the end of the 18th century, people started growing sugarcane in the rural area of the province, and São Paulo was the way to the port of Santos.

In the 19th century, after the construction of São Paulo's Law School, São Paulo became the capital of the province, politicians and philosophers went there, and the first newspapers and books were printed. At this time, many European immigrants, especially Italians, moved to São Paulo to work at the big coffee plantations.

At the end of the 19th century and the start of the 20th century, the city grew quickly. Some people who study Brazilian History says "the city was rebuilt".

In the 20th century, many factories were built, and more immigrants moved to work there.

Today, São Paulo is a centre of commerce, services and technology, and some people consider it the most important Latin American city. 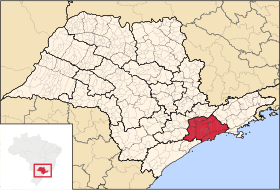 São Paulo is crossed by the Tropic of Capricorn. It is in a plateau (a high flat area), 760 metres above the sea level.

Because of its altitude, its climate (subtropical) is not so warm as it is near the coast. São Paulo is 70 km far from the coast, 420 km far from Rio de Janeiro, and 1,020 km far from Brasília, the Brazilian capital city. 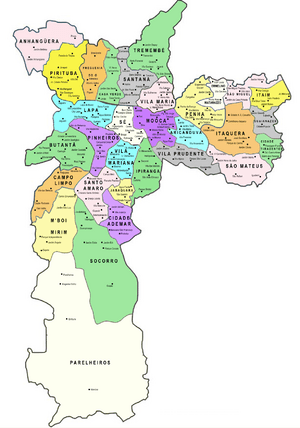 São Paulo and its subdivisons

The city is divided into 31 boroughs, and each borough is divided into neighbourhoods. The boroughs form nine regions (or "zones"), with similar geographic location and history, but most people and companies prefer to use another division, with only five regions.

Descendants of many peoples live in São Paulo: Italian, Portuguese, Spanish, African, German, Lebanese, Japanese. There are also descendant of peoples from other South American countries, for example Argentina and Bolivia, and other places, for example Chinese people, Jews, and South Koreans.

Every day, people from other cities or states move to São Paulo. Many are people from the Northeast region of Brazil that try to find a job in the city. 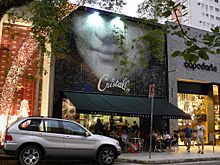 Oscar Freire St., one of the most luxurious streets in the world.

São Paulo is considered the "financial capital of Brazil", as it is the location for the headquarters of major corporations and of banks and financial institutions. São Paulo is Brazil's highest GDP city and the 10th largest in the world, using Purchasing power parity. 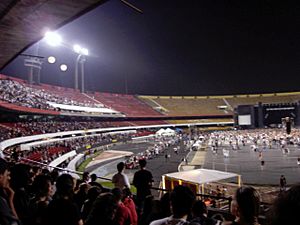 Football is the sport with the biggest number of fans in the city. The most important clubs from the city are Corinthians, Palmeiras, and São Paulo. They are all playing in the Brazilian Série A, the major football championship in Brazil. Except Palmeiras.

There are also other big and medium teams from São Paulo, for example Portuguesa and Juventus, and many small teams. However, Santos FC, that is a club from Santos, a city in the coast, is the fourth team in number of supporters.

Other major sports are basketball and volleyball. Some people also play handball, tennis, and other sports. 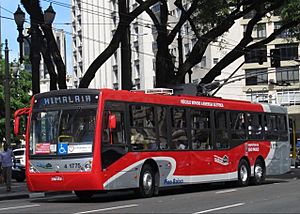 Some people do not like São Paulo because of the big number of cars, trucks and motorcycles on streets and avenues. The public transport is also very important for the people who live there. There are many bus lanes in the city, and a big Metro (underground railway) and railway system.

São Paulo has three airports and is the second city in number of helicopters of the world (New York City is the first). 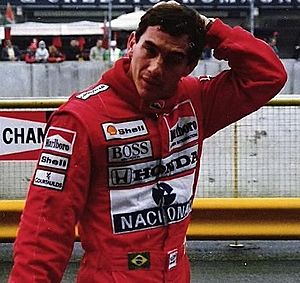 Below is a list of famous people born in São Paulo.

All content from Kiddle encyclopedia articles (including the article images and facts) can be freely used under Attribution-ShareAlike license, unless stated otherwise. Cite this article:
São Paulo Facts for Kids. Kiddle Encyclopedia.