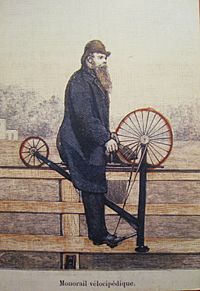 A monorail is like a train, but instead of having two sets of wheels that balance on a railway track, the monorail is balanced on top of one rail. Monorails are often used to transport people around large cities. Some monorails utilize magnets to hover on their rails, reducing friction between the train and the rail. The first monorail was invented in the 19th Century. 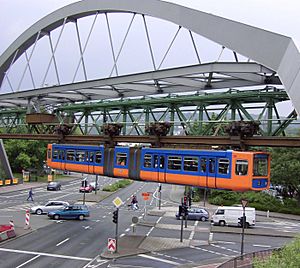 Modern monorails depend on a large solid beam as the vehicles' running surface. There are a number of competing designs divided into two broad classes, straddle-beam and suspended monorails.

The most common type is the straddle-beam, in which the train straddles a steel or reinforced concrete beam 2 to 3 feet (0.6 to 0.9 m) wide. A rubber-tired carriage contacts the beam on the top and both sides for traction and to stabilize the vehicle. The style was popularized by the German company ALWEG.

The French company SAFEGE offers a system with cars suspended beneath the wheel carriage, and the wheels ride inside the single beam. The Chiba Urban Monorail is the world's largest suspended network.

There is also a historical type of suspension monorail developed by German inventors Nicolaus Otto and Eugen Langen in the 1880s. It was built in the twin cities of Barmen and Elberfeld in Wupper Valley, Germany, opened in 1901, and is still in operation.

Almost all modern monorails are powered by electric motors fed by dual third rails, contact wires or electrified channels attached to or enclosed in their guidance beams, but diesel-powered monorail systems also exist. Historically some systems, such as the Lartigue Monorail, used steam locomotives. 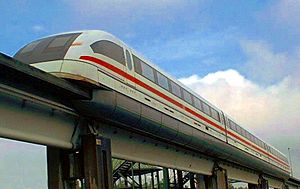 Magnetic levitation train (maglev) systems by the German Transrapid were built as straddle-type monorails, as they are highly stable and allow rapid deceleration from great speed. At speed, maglev trains hover over the track and are not in physical contact with it. The maglev is the fastest train of any type, the experimental SCMaglev having recorded a speed of 603 km/h (375 mph). The commercial Shanghai Maglev Train has run at 501 km/h (311 mph). However, the guideway is so wide that it can be argued it is not legitimate to call it a monorail. There are also slower maglev monorails intended for urban transport, such as Japan's Linimo (2003). 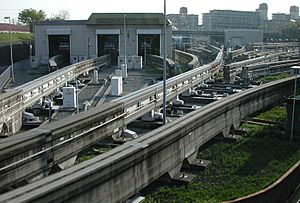 Some early monorails (notably the suspended monorail at Wuppertal, Germany, which dates from 1901 and is still in operation) have a design that makes it difficult to switch from one line to another. Some other monorails avoid switching as much as possible by operating in a continuous loop or between two fixed stations, as in the Seattle Center Monorail.

Current monorails are capable of more efficient switching than in the past. With suspended monorails, switching may be accomplished by moving flanges inside the beamway to shift trains to one line or another. 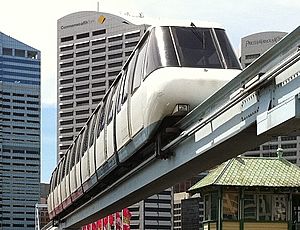 The Sydney Monorail in Sydney avoided switching by operating in a single loop. 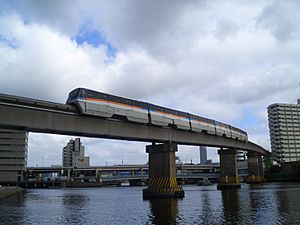 Straddle-beam monorails require that the beam moves for switching, which was an almost prohibitively ponderous procedure. Now the most common way of achieving this is to place a moving apparatus on top of a sturdy platform capable of bearing the weight of vehicles, beams and its own mechanism. Multiple-segmented beams move into place on rollers to smoothly align one beam with another to send the train in its desired direction, with the design originally developed by ALWEG capable of completing a switch in 12 seconds. Some of these beam turnouts are quite elaborate, capable of switching between several beams or simulating a railroad double-crossover.

An alternative to using a wye or other form of switch, is to use a turntable, where a car sits upon a section of track that can be reoriented to several different tracks. For example, this can be used to switch a car from being in a storage location, to being on the main line. The now-closed Sydney Monorail had a traverser at the depot, which allowed a train on the main line to be exchanged with another from the depot. There were about six lines in the depot, including one for maintenance.

Rubber-tired monorails are typically designed to cope with a 6% grade. Rubber-tired light rail or metro lines can cope with similar or greater grades - for example, the Lausanne Metro has grades of up to 12% and the Montreal Metro up to 6.5%, while VAL systems can handle 7% grades. 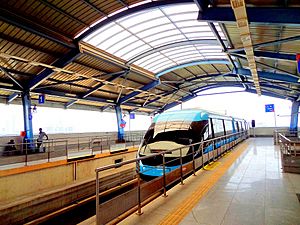 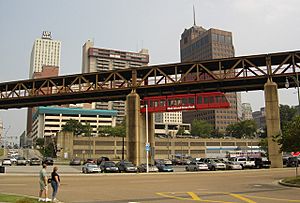 All content from Kiddle encyclopedia articles (including the article images and facts) can be freely used under Attribution-ShareAlike license, unless stated otherwise. Cite this article:
Monorail Facts for Kids. Kiddle Encyclopedia.