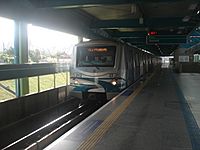 Train of Line 2 of system

The São Paulo Metro (Portuguese: Metropolitano de São Paulo) is a metro system serving the city of São Paulo. Is controlled and monitored by Companhia do Metropolitano de São Paulo, in addition to carrying around every day 3,4 million passengers. It was founded on April 24, 1968 and opened on September 14, 1974. It has five lines, 74 kilometers and 64 stations. It is currently booming. It is the largest and the first rapid transit system in Brazil

All content from Kiddle encyclopedia articles (including the article images and facts) can be freely used under Attribution-ShareAlike license, unless stated otherwise. Cite this article:
São Paulo Metro Facts for Kids. Kiddle Encyclopedia.