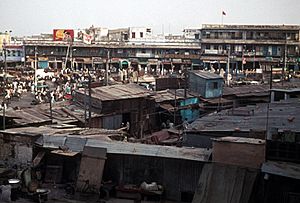 A slum is a part of a city or a town where many poor people live. It is a place where people may not have basic needs. Some of these people may also have social disadvantages. There are slums in most of the big cities of the world. They may not be called slum, however; see shanty town.

Charles Dickens was a great author of Victorian London. His account of the St Giles rookery was:

"Wretched houses with broken windows patched with rags and paper; every room let out to a different family, and in many instances to two or even three – fruit and ‘sweetstuff’ manufacturers in the cellars, barbers and red-herring vendors in the front parlours, cobblers in the back; a bird-fancier in the first floor, three families on the second, starvation in the attics, Irishmen in the passage, a ‘musician’ in the front kitchen, a charwoman and five hungry children in the back one – filth everywhere – a gutter before the houses, and a drain behind – clothes drying, and slops emptying from the windows; ... men and women, in every variety of scanty and dirty apparel, lounging, scolding, drinking, smoking, squabbling, fighting, and swearing".

All content from Kiddle encyclopedia articles (including the article images and facts) can be freely used under Attribution-ShareAlike license, unless stated otherwise. Cite this article:
Slum Facts for Kids. Kiddle Encyclopedia.