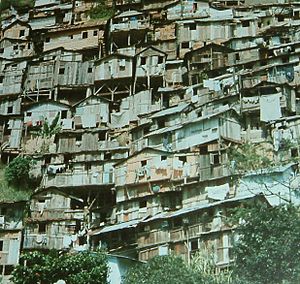 Chabolas a plomo - shanty town perched on the side of a steep mountain in Latin America.

Shanty towns are slums on the outskirts of many cities – especially in third world countries. Normally there are not many shanty towns in more economically developed countries. Often of low cost, with houses badly built with plywood, corrugated metal, sheets of plastic, cardboard or any available material. Often irregular structures good enough to keep the rain away or to protect from the summer sun. Pets and animals are often left to roam for food and water.

Many are built on land without a permit and often have no roads, numbered street, electricity or telephone lines. Some homes in shanty towns have some services but they are unkept and pose health and fire hazards. Sometimes shanty towns can take up whole parts of a city and may include millions of dwellers – such as in the cities of Brazil- see Favelas.

Many shanty town settlements are built on the banks of rivers and as a result the residents suffer the effect of floods or from industrial toxins in the water. Some are built close to rubbish dumps.

All content from Kiddle encyclopedia articles (including the article images and facts) can be freely used under Attribution-ShareAlike license, unless stated otherwise. Cite this article:
Shanty town Facts for Kids. Kiddle Encyclopedia.