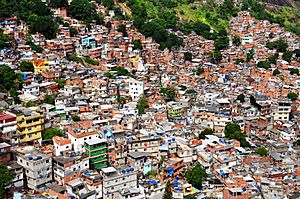 Rocinha is the largest hill favela in Rio de Janeiro. Favelas are found in cities all over Brazil, but many of the most famous ones are in Rio.

A favela is the term for a shanty town in Brazil. They are mostly found on the outskirts of urban areas. The people living in the favelas are the poor, and the rich people live in the city. Most of the buildings in favelas are made out of cheap materials, like plastic, wood, glass and scrap. The people usually build their houses themselves and invite their friends to help them build. Crime is common in favelas, as many of the people have no other way to make money. The favelas themselves are also considered illegal, because the people do not pay tax.

All content from Kiddle encyclopedia articles (including the article images and facts) can be freely used under Attribution-ShareAlike license, unless stated otherwise. Cite this article:
Favelas Facts for Kids. Kiddle Encyclopedia.