Caracas is the capital city of Venezuela. Santiago de Leòn de Losada founded the city in 1567. It is where Simon Bolivar was born. The city has nearly 6 million people, who live in the metropolitan area. Caracas is the center of the economical activity of the country and also hosts the main government offices of Venezuela.

After WW2 the city has experienced a huge growth, thanks to the oil revenues of the country. Nearly half a million Europeans immigrated to the city in the 1950s ( that had in those years only one million inhabitants) and so Caracas developed a typical western-European look in the new modern areas.

All the best teams of the sports done in Venezuela are concentrated in the metropolitan area of Caracas. Between those teams we have:

Many beautiful modern buildings can be seen in the city. Here there are some of them: 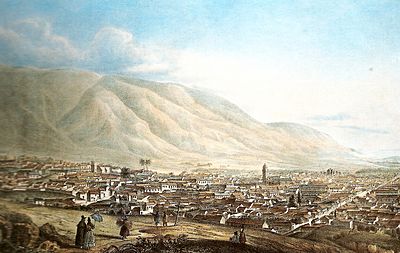 All content from Kiddle encyclopedia articles (including the article images and facts) can be freely used under Attribution-ShareAlike license, unless stated otherwise. Cite this article:
Caracas Facts for Kids. Kiddle Encyclopedia.