Panama is a country in Central America. Its official name is the Republic of Panama, and it is most famous for the Panama Canal. Countries bordering Panama are Costa Rica in the Northwest and Colombia in the Southeast. Panama is between the Caribbean Sea and the Pacific Ocean. Most of the people in Panama are Roman Catholic (about 80%).

The Caribbean coastline has many good natural harbors. However, Cristóbal, at the Caribbean terminus of the canal, had the only important port facilities in the late 1980s. The many islands of the Archipiélago de Bocas del Toro, near the beaches of Costa Rica, made an extensive natural roadstead and shield for the port of Almirante. The over 350 San Blas Islands, near Colombia, are spread out for more than 160 km along the sheltered Caribbean coastline.

The information there **Other** is likely including Arabs, East Indians, and some Russian.

For ships, Panama is a flag of convenience.

Panama's economy, because of its key geographic location, is mainly based on a well-developed service sector, especially commerce, tourism, and trading. The handover of the Canal and military installations by the United States has given rise to large construction projects.

The nine provinces and three provincial-level comarcas of Panama.

Panama is divided into nine provinces. Also, there are five Comarcas (literally: "Shires") populated by a variety of indigenous groups. 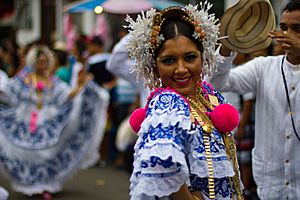 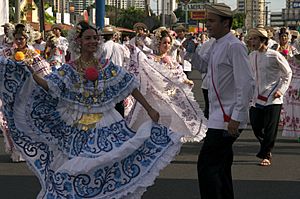 The culture of Panama derives from European music, art and traditions brought by the Spanish to Panama. Hegemonic forces have created hybrid forms blending African and Native American culture with European culture. For example, the tamborito is a Spanish dance with African rhythms, themes and dance moves.

Dance is typical of the diverse cultures in Panama. The local folklore can be experienced at a multitude of festivals, through dances and traditions handed down from generation to generation. Local cities host live reggae en español, reggaeton, haitiano (compas), jazz, blues, salsa, reggae, and rock music performances.

Outside Panama City, regional festivals take place throughout the year featuring local musicians and dancers. Panama's blended culture is reflected in traditional products, such as woodcarvings, ceremonial masks and pottery, as well as in Panama's architecture, cuisine and festivals. In earlier times, baskets were woven for utilitarian uses, but now many villages rely almost exclusively on income from the baskets they produce for tourists.

An example of undisturbed, unique culture in Panama is that of the Guna who are known for molas. Mola is the Guna word for blouse, but the term mola has come to mean the elaborate embroidered panels made by Guna women, that make up the front and back of a Guna woman's blouse. They are several layers of cloth, varying in color, that are loosely stitched together, made using a reverse appliqué process.

The Christmas parade, known as El desfile de Navidad, is celebrated in the capital, Panama City. This holiday is celebrated on December 25. The floats in the parade are decorated in the Panamanian colors, and women wear dresses called pollera and men dress in traditional montuno. In addition, the marching band in the parade, consisting of drummers, keeps crowds entertained. In the city, a big Christmas tree is lit with Christmas lights, and everybody surrounds the tree and sings Christmas carols.

Since Panama's cultural heritage is influenced by many ethnicities the traditional cuisine of the country includes ingredients from many cultures, from all over the world: a mix of African, Spanish, and Native American techniques, dishes, and ingredients, reflecting its diverse population. Since Panama is a land bridge between two continents, it has a large variety of tropical fruits, vegetables and herbs that are used in native cooking. The famous fish market known as the "Mercado de Mariscos" offers fresh seafood and Ceviche, a seafood dish. Small shops along the street which are called kiosco and Empanada, which is a typical latinamerican pastry, including a variety of different ingredients, either with meat or vegetarian, mostly fried. Another kind of pastry is the pastelito, with the only difference in comparison to empanadas is that they are bigger.

The traditional women's clothing is the pollera. It originated in Spain in the 16th century, and by the early 1800s it was typical in Panama, worn by female servants, especially wet nurses (De Zarate 5). Later, it was adopted by upper-class women.

The original pollera consists of a ruffled blouse worn off the shoulders and a skirt with gold buttons. The skirt is also ruffled, so that when it is lifted up, it looks like a peacock's tail or a mantilla fan. The designs on the skirt and blouse are usually flowers or birds. Two large matching pom poms (mota) are on the front and back, four ribbons hang from the front and back from the waist, five gold chains (caberstrillos) hang from the neck to the waist, a gold cross or medallion on a black ribbon is worn as a choker, and a silk purse is worn at the waistline. Earrings (zaricillos) are usually gold or coral. Slippers usually match the color of the pollera. Hair is usually worn in a bun, held by three large gold combs that have pearls (tembleques) worn like a crown. Quality pollera can cost up to $10,000, and may take a year to complete.

Today, there are different types of polleras; the pollera de gala consists of a short-sleeved ruffle skirt blouse, two full-length skirts and a petticoat. Girls wear tembleques in their hair. Gold coins and jewelry are added to the outfit. The pollera montuna is a daily dress, with a blouse, a skirt with a solid color, a single gold chain, and pendant earrings and a natural flower in the hair. Instead of an off-the-shoulder blouse it is worn with a fitted white jacket that has shoulder pleats and a flared hem.

Traditional clothing in Panama can be worn in parades, where the females and males do a traditional dance. Females gently sway and twirl their skirts, while men hold their hats in their hands and dance behind the females.

All content from Kiddle encyclopedia articles (including the article images and facts) can be freely used under Attribution-ShareAlike license, unless stated otherwise. Cite this article:
Panama Facts for Kids. Kiddle Encyclopedia.