A competitive women's volleyball match. The ball is a blur above the net 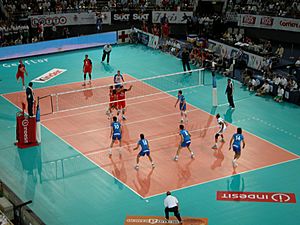 Italy-Russia match. Position of ball is a blur due to the speed that it was hit.

Volleyball is a team sport. The teams are separated by a large net. It has six players on each side of the net. Each team is allowed twelve substitution players. The game starts when the captain from each team decides which side of the court they will play on, by the toss of a coin, which also determines who will serve (hit) the ball first. The point of the game is to keep the ball in the air. The ball can be played with any part of the body, with a maximum of three strokes a team. If at any point the ball hits the floor, the side that the ball landed on it is a point for the other team.

In 1895, William G. Morgan invented a new game called "Mintonette". However, when an observer named Alfred Halstead saw the game being played, he noticed the volleying action used to get the ball over the net, so he decided to change the name to "volleyball".

Morgan wanted to create a skilled activity, which required more players, less space, and less exertion than basketball. The first net was a “rope” and the first ball was a basketball air bladder. Until 1960, men and women played with different rules. Now the rules are the same except for the height of the net, the men’s net is higher.

A player cannot hit the ball twice. A point is gained when a team plays the ball in the opposition's court and the ball is not defended, therefore it lands within the court. The ball must be served (hit) from outside the court, otherwise it will be regarded as a foul. The game is played in sets of 25 points (sometimes 21). The team that reaches 25 (or 21) points first, wins the set. Each game consists of 3-5 sets (or the first one to 3 in middle school). The fifth set is played to 15 points.

A player usually wears knee pads to protect their knees from becoming bruised during dives for the volleyball. In order to win the game, the winners must be ahead by 2 points or the game goes on until you win by 2 points.

The sports governing body is the Fédération Internationale de Volleyball (FIVB). Digging is the ability to prevent the ball from touching one's court after a spike or attack, particularly a ball that is nearly touching the ground. Usually, the player is diving (throwing themselves towards the ground) to be the barrier to block the ball from hitting the court.In many aspects, this skill is similar to passing, or bumping: overhand dig and bump are also used to distinguish between defensive actions taken with fingertips or with joined arms.

Some specific techniques are more common in digging than in passing. A player may sometimes perform a "dive", i.e., throw his or her body in the air with a forward movement in an attempt to save the ball, and land on his or her chest. When the player also slides his or her hand under a ball that is almost touching the court, this is called a "pancake". The pancake is frequently used in indoor volleyball. Besides being one of the best-known sports in the world, and being a favorite to millions of people, it is in the Olympics.

The objective of the game is to legally return the ball over the net in such a manner that the opponent’s team cannot make a legal return. The main causes of illegal plays are: holding, carrying, or lifting with the palm of the hands, four touches on one side, and two consecutive touches by one player. A regulation game is played with six players on the court. They are to rotate to serve in a clockwise direction when facing the net. The server will come from the right front position, serve, then play the right back position.

Serving: may be underhand or overhand. If the serve touches the net and goes to the opponent’s side, it must be played. The server is not allowed to step on or over the end line when serving. In class, the server must say the score before serving.

Float: Similar to a knuckle ball in baseball, the server stands flat footed and contacts the ball with a stiff wrist and does not swing through after contact. This causes no spin to be on the ball, allowing it to catch any air current and causes the ball to change directional course throughout the whole air course.

Top Spin: This serve is executed by snapping hard on the ball during contact. This puts a forward spin on the ball, which causes it to drop faster than a float.

Jump Serve: A jump serve is used to assist the server get more height. By jumping they have a better angle to put the ball down into the court, and are less likely to be underneath the ball. This can be a float or topspin ball depending on the contact, arm swing, and approach.

Pass or Bump (underarm pass): This is a pass used when the ball approaches a player below their shoulders. You are to hold your fingers together, elbows straight, and contact the ball with the forearms with shoulders facing the net on impact. Defined as a dig when passing a hard driven hit. Also pancaking is a form of passing. This is when the player has sprawled out to the floor in a last hope type of decision for the ball to land on their hand and it pop straight up.

Set or volley: (overhead pass) direct the ball to a place specifically. Hands high, flex wrist, contact the ball with the finger pads, and elbows bent. Use your legs and arms to project the ball into the air.

Hit: A hard hit ball from a height above the net, straight to the opponent’s side. Contact the ball with the cupped fingers and a long arm swing.

Block: (defensive hit) Two hands above the head, jumping with arms reaching for a ball that has been spiked. A block is used to prevent a volley from crossing the net.

Dig: Digging is the ability to prevent the ball from touching one's court after a spike or attack, particularly a ball that is nearly touching the ground.

Serve: to put the ball into play from the end line.

Side out: the team that served made a mistake, ball now goes to the opponent’s for service.

Set: overhead pass that allows a player to spike

Bump: an underhand pass performed when a ball is below the shoulders

Spike: a hard driven ball aimed at the opponents.

Block: a defensive play to prevent the ball from crossing the net.

All content from Kiddle encyclopedia articles (including the article images and facts) can be freely used under Attribution-ShareAlike license, unless stated otherwise. Cite this article:
Volleyball Facts for Kids. Kiddle Encyclopedia.