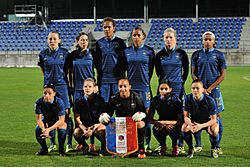 The France women's national football team is the women's association football team that represents France. The team wasn't very good in the beginning, but they became a powerful team. They reached the quarter-finals of the 2015 FIFA Women's World Cup. They finished fourth in the 2011 FIFA Women's World Cup. Their best performance in the UEFA Women's Championship was in the 2013 and 2007 tournament, where they reached the quarter-finals. The top scorer of the team is currently Marinette Pichon, with 81 goals.

All content from Kiddle encyclopedia articles (including the article images and facts) can be freely used under Attribution-ShareAlike license, unless stated otherwise. Cite this article:
France women's national football team Facts for Kids. Kiddle Encyclopedia.