Toulouse (Occitan: Tolosa) is a commune in southwestern France. It is the capital of the department of Haute-Garonne, as well as of the Occitanie region. It is also the capital of the arrondissement of Toulouse. In 2014, 1.312.304 people live in the urban area, and 466.297 in the city itself. Toulouse is the 4th largest city of France.

The city has a unique architecture made of pinkish terracotta bricks, which earned it the nickname la Ville Rose ("the Pink City"). Toulouse counts two UNESCO World Heritage Sites: the Canal du Midi (designated in 1996 and shared with other cities) and the St. Sernin Basilica, the largest remaining Romanesque building in Europe, designated in 1998.

The climate of Toulouse, in the Köppen climate classification, is Cfb - Oceanic climate with template summers.

The inhabitants of Toulouse are known, in French, as Toulousains (women: Toulousaines).

Evolution of the population in Toulouse 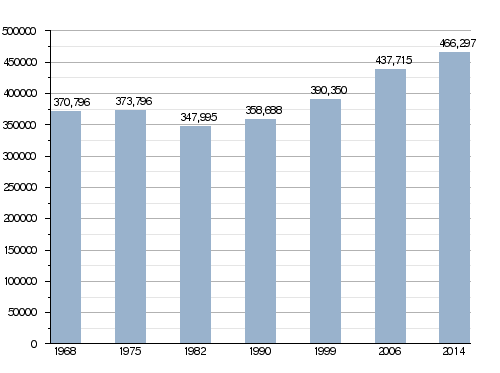 Toulouse is the prefecture of the Haute-Garonne department, the capital of the arrondissement of Toulouse and the administrative centre (French: chef-lieu) of 11 cantons:

It is part of the intercommunality Metropolitan Toulouse (French: Toulouse Métropole).

Saint-Gaudens is twinned with:

Toulouse also has accords of cooperation with the following towns:

In addition, Toulouse has an adoption city:

Notable births and deaths in Toulouse

All content from Kiddle encyclopedia articles (including the article images and facts) can be freely used under Attribution-ShareAlike license, unless stated otherwise. Cite this article:
Toulouse Facts for Kids. Kiddle Encyclopedia.