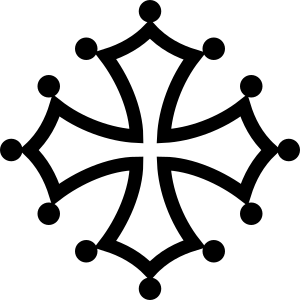 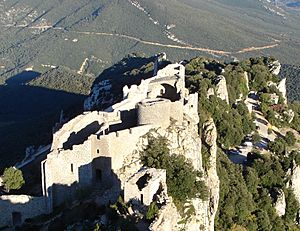 The lower, older part of Castle Peyrepertuse. This castle was one of the last Cathar strongholds to fall

The Cathar faith was a version of Christianity. They were usually considered Gnostics. The word 'Cathar' comes the Greek word katharos meaning 'unpolluted' (from Tobias Churton, The Gnostics) or "the pure ones".

Women were prominent in the faith. They were pacifists. They didn't eat anything that was made from other animals, including meat and cows milk. The only exception to this was fish. Fish was OK to eat because they believed fishes were not alive but just things that were sometimes produced from dirt and water.

They preached tolerance of other faiths. They rejected the usual Christian rules of marriage and only believed in the New Testament. An earlier 10th century Bulgarian heresy, Bogomilism and also Manichaeism started some of these trends.

They used a bible in the language people spoke. Many other Christians used a Bible in Latin. Latin was spoken only by the priests.

In 1145, open challenge to Catholic dominance began. In about 1165, the first Cathars said that the Church was "full of ravening (starving) wolves and hypocrites" and "worshipping the wrong God", right in front of the most powerful Catholics. In 1166, the Council of Oxford in England wiped out the English Cathars. It was also suppressed in Northern France. In 1167, Cathar bishops met to discuss organizing a counter Church - in the South of France, the Languedoc nobles protected it, and many noble women became "Perfects". Parish clergy had low morale, or confidence.

The Catholic Church was against Catharism, seeing it as a heresy.

In the South of France there was tremendous religious fervor, and an economy that was starting to grow, and a social class of merchants and peasants was starting to grow. Peasants owned their own land. Meanwhile, in other parts of Europe, peasants were forced to give up their land to nobles and become serfs or slaves - the system of feudalism. There was a strong central absolute monarchy that did not exist in the South of France. The burghers and bankers had more power in this looser system. R. I. Moore is a historian who believes that it was desire to crush this system and take over the land that drove the attack.

However, there was real cultural and religious difference to cause problems: Troubadors, who combined some of the traditions of the Bards of the Celts, and Jews, were both part of the multicultural society in the South of France. Their influences were not appreciated by local or Roman Church figures. The 12th century Roman Catholic Monks were founding their monasteries outside the towns, drawing the best people there.

The Cathars thus had little competition. The Cathar "Perfects", the so-called Good Men or Good Women, lived restrained lives and spread their faith in towns - where the Catholics in general did not have their best agents. Also, Cathars preached that only these Good leaders had to follow the regimens their whole lives - lay people could repent only on their deathbeds. Many 20th century Christian sects have similar beliefs.

The Pope ordered a crusade against the Cathars in southern France. He said any crusader who answered the call would be given the same rewards as a crusader who went to the Holy Land. This was an absolution of all sin.

In the Launguedoc, on the 22nd of July 1209, a force of about 30,000 Crusaders arrived at the walls of Beziers bearing the cross pattee to mislead and create ease among the Cathars, thinking they were friend, not foe, and demanded that about 200 Cathars be surrendered. The people of the town who were mostly Catholic, said that rather than turn over their friends and family, "we would rather be flayed alive."

A mistake by the defenders of Beziers let thousands of attackers in. Arnauld Amaury made the famous quote "Kill them all, god knows his own" on being asked how to tell who were Cathars during the assault. Everyone in the town was killed, some while taking refuge in the church. It is guessed that 20,000 were killed, many of whom were Catholics and not Cathars at all. The crusade became known as the Albigensian crusade after the town of Albi. It was to wipe out the Cathars almost entirely over forty or so years. The Crusaders wanted to go home, but were ordered by the Pope to continue until the whole South of France was controlled and all Cathars were dead. In 1210, they attacked the fortress at Minerv and built "the first great bonfire of heretics" - beginning the practice of burning at the stake that would continue in the Inquisition of the Counter-Reformation. It is interesting to note that at the siege of Montsegur when the fires were lit the Cathars ran down the hill and threw themselves on, as their beliefs were very strong.

Catharism disappeared from the northern Italian cities after the 1260s, pressured by the Inquisition. The last known Cathar perfectus in the Languedoc, Guillaume Bélibaste, was killed in 1321.

All content from Kiddle encyclopedia articles (including the article images and facts) can be freely used under Attribution-ShareAlike license, unless stated otherwise. Cite this article:
Catharism Facts for Kids. Kiddle Encyclopedia.