Béziers (Occitan: Besièrs) is a commune in the Hérault département in the Occitanie region in southern France. It is a subprefecture of the department and also the capital of the arrondissement of the same name.

Béziers is one of the oldest cities in France. Research shows that Béziers was built by Greeks in the 6th century BC. Some archaeologists think that Béziers could be the oldest town of France, even before Marseille. 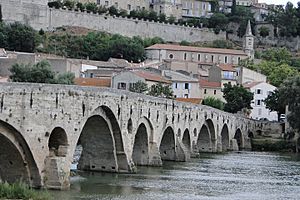 The site where is Béziers has been occupied since Neolithic times, before the arrival of Celts. Roman Betarra was on the road that linked Provence with Iberia. The Romans refounded the city as a new place for veterans in 36–35 BC and called it Colonia Julia Baeterrae Septimanorum. Stones from the Roman amphitheatre were used to construct the city wall during the 3rd century. The city was occupied by the Moors between 720 and 752.

Béziers was a Languedoc stronghold of Catharism, which the Catholic Church condemned as heretical and which Catholic forces exterminated in the Albigensian Crusade.

Béziers was the first place to be attacked. The crusaders got to the town on 21 July 1209 and burned the cathedral of Saint Nazaire. A few parts of the Romanesque cathedral survived, and repairs started in 1215. The restoration, along with that of the rest of the city, continued until the 15th century.

After the Louis Napoléon's coup d'état in 1851, troops killed protesters in Béziers. Others were condemned to death or taken to the Guiana.

The city is in the southeastern of the department, in the plain of Hérault (the plaine héraultoise). It is on a small cliff on the eastern side of the Orb river, a tributary of the Hérault river.

The climate of Béziers, in the Köppen climate classification, is Csa - Mediterranean climate with hot summers.

The inhabitants of Béziers are known, in French, as Biterrois (women: Biterroises), from Baeterrae, the Latin name of the city.

Evolution of the population in Béziers 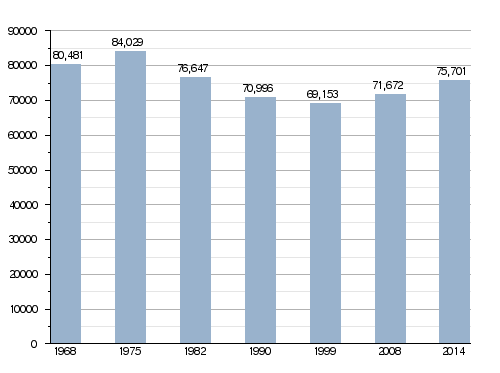 Béziers is a subprefecture of the Hérault department, the capital of the arrondissement of Béziers and the administrative centre (French: chef-lieu) of three cantons: Béziers-1, Béziers-2 and Béziers-3.

Béziers is twinned with:

All content from Kiddle encyclopedia articles (including the article images and facts) can be freely used under Attribution-ShareAlike license, unless stated otherwise. Cite this article:
Béziers Facts for Kids. Kiddle Encyclopedia.