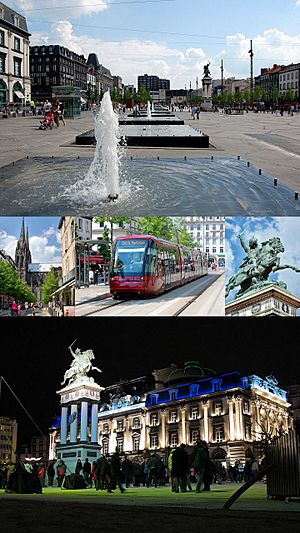 Clermont-Ferrand is a city in France. It has about 143,000 inhabitants. Clermont-Ferrand (in Occitan Clarmont-Ferrand / Clarmont of Auvèrnhe) is a city in central-southern France, prefecture of the department of Puy-de-Dome and chief town of the Auvergne region. Partly for historical reasons, the city is often called the "Clermont".

The modern city was born from the union of two separate towns, Clermont and Montferrand. This union has been imposed by Louis XIII in 1630 (Edict of Troyes) and was confirmed by Louis XV.

While Montferrand was founded in the early twelfth century by the Counts of Auvergne on the model of fortified cities in the Southwest, Clairmont is much older, as it existed in ancient times. The earliest mention of the existence of Clairmont contained in the work of Strabo, the early first century. The city was then known Nemossos described as a "metropolis of Arvernes." She later took the name of Augustonemetum then Arverni.

Clermont-Ferrand is twinned with:

All content from Kiddle encyclopedia articles (including the article images and facts) can be freely used under Attribution-ShareAlike license, unless stated otherwise. Cite this article:
Clermont-Ferrand Facts for Kids. Kiddle Encyclopedia.