Orléans is a city in France, the prefecture of the Centre-Val de Loire region and the Loiret department. 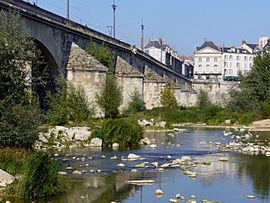 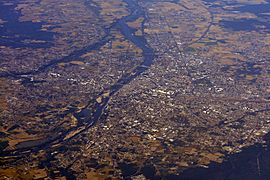 Orléans is located in the northern bend of the Loire, which crosses from east to west. Orléans belongs to the vallée de la Loire sector between Sully-sur-Loire and Chalonnes-sur-Loire, which was in 2000 inscribed by UNESCO as a World Heritage Site. The capital of Orléanais, 120 kilometres southwest of Paris, is bordered to the north by the Beauce region, more specifically the Orléans Forest (French: forêt d'Orléans) and Orléans-la-Source neighbourhood, and the Sologne region to the south.

At the end of the 1960s, the Orléans-la-Source neighbourhood was created, 12 kilometres (7 mi)to the south of the original commune and separated from it by the Val d'Orléans and the Loiret River (whose source is in the Parc Floral de la Source). This quarter's altitude varies from about 100 to 110 m (330 to 360 ft).

The Loire and navigation

In Orléans, the Loire is separated by a submerged dike known as the dhuis into the Grande Loire to the north, no longer navigable, and the Petite Loire to the south. This dike is just one part of a vast system of construction that previously allowed the Loire to remain navigable to this point.

The Loire was formerly an important navigation and trading route. With the increase in size of ocean-going ships, large ships can now navigate the estuary only up to about Nantes.

Boats on the river were traditionally flat-bottomed boats, with large but foldable masts so the sails could gather wind from above the river banks, but the masts could be lowered in order to allow the boats to pass under bridges. these vessels are known as gabarre, futreau, and so on, and may be viewed by tourists near pont Royal.

The river's irregular flow strongly limits traffic on it, in particular at its ascent, though this can be overcome by boats being given a tow.

The Loire bursting its banks at Orléans

An Inexplosible-type paddle steamer owned by the mairie was put in place in August 2007, facing Place de la Loire and containing a bar.

Every two years, the Festival de Loire recalls the role played by the river in the commune's history.

On the river's north bank, near the town centre, is the Canal d'Orléans, which connects to the Canal du Loing and the Canal de Briare at Buges near Montargis. The canal is no longer used along its whole length. Its route within Orléans runs parallel to the river, separated from it by a wall or muret, with a promenade along the top. Its last pound was transformed into an outdoor swimming pool in the 1960s, then filled in. It was reopened in 2007 for the "fêtes de Loire." There are plans to revive use of the canal for recreation and install a pleasure-boat port there.

Orléans is twinned with:

It has a partnership with:

All content from Kiddle encyclopedia articles (including the article images and facts) can be freely used under Attribution-ShareAlike license, unless stated otherwise. Cite this article:
Orléans Facts for Kids. Kiddle Encyclopedia.