Île d'Orléans ( English: Island of Orleans) is located in the Saint Lawrence River about 5 kilometres (3.1 mi) east of downtown Quebec City, Quebec, Canada. The island was one of the first parts of the province to be colonized by the French, and a large percentage of French Canadians can trace ancestry to early residents of the island. The island has been described as the "microcosm of traditional Quebec and as the birthplace of francophones in North America."

It has about 7,000 inhabitants, spread over 6 villages.

The island is accessible from the mainland via the Île d'Orléans Bridge from Beauport. Route 368 is the sole provincial route on the island, which crosses the bridge and circles the perimeter of the island. At the village of Sainte-Pétronille toward the western end of the island, a viewpoint overlooks the impressive Chute Montmorency (Montmorency Falls), as well as a panorama of the St. Lawrence River and Quebec City.

Île d'Orléans is twinned with Île de Ré in France.

The Island of Orleans is situated between the Laurentian Plateau or Canadian Shield to the north and the Appalachian Mountains to the south. Its north-eastern point marks the boundary between the St. Lawrence River and its estuary (the largest in the world), where fresh water begins to mix with salt water.

The island is separated from the mainland by 2 channels; to the north-west is the Île d'Orléans Channel and to the south-east is the Grands Voiliers Channel.

Of irregular form with jagged coves and capes, the Island of Orleans is 34 kilometres (21 mi) long and 8 kilometres (5.0 mi) wide at the widest point. It is 75 kilometres (47 mi) in circumference, with a total surface area of 190 square kilometres (73 sq mi). It has a hilly relief, small valleys, and gradual crests that reach a maximum height of about 150 metres (490 ft) at Sainte-Pétronille and Saint-Laurent in the south.

The main streams of Île d'Orléans are:

Administratively, the island is within Quebec's Capitale-Nationale region, and constitutes the L'Île-d'Orléans Regional County Municipality. It is further subdivided in the municipalities of: 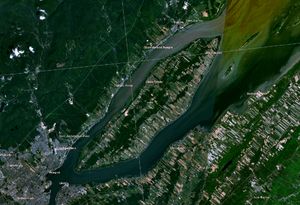 Satellite image of Île d'Orléans in the Saint Lawrence River 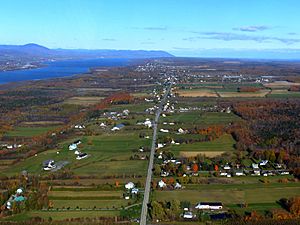 Lots of land in Saint-Pierre-de-l'Île-d'Orléans

The island had long been inhabited by Indigenous peoples. The Huron called it Minigo (meaning "Enchantress", because of its charm). The French explorer Jacques Cartier first set foot on the island in 1535 near the present-day village of Saint-François. He called it Île de Bascuz (from Bacchus) because of the abundance of wild grapes growing on the island. Officials later changed the name to Île d'Orléans in honour of the second son of King Francis I, Henri II, the Duke of Orléans. The island was also known as Grande Île, Sainte-Marie, and Saint-Laurent for certain periods in the 17th and 18th centuries.

Early French settlers, immigrating mostly from the Normandy and other provinces in northwest France, were attracted to the island because of its fertile soil. They colonized it according to the seigneurial system of New France, which is still evident in its layout, featuring residences close together, with outlying long, narrow fields and a common. In 1661, the first parish of Sainte-Famille was founded, followed by another four parishes in 1679/1680. By 1685, there were 1205 mostly French inhabitants and 917 livestock.

In 1744, colonists completed the 67 kilometres (42 mi) Chemin Royal (Royal Road), which encircles the entire island. Jean Mauvide, a surgeon for the King of France, built the Manoir Mauvide-Genest in 1734 as his residence. In 1759 it was occupied by British General Wolfe when his forces occupied the island shortly before the Battle of the Plains of Abraham during the Seven Years' War. Great Britain was victorious.

In the 19th and early 20th century, several boat-building yards operated on the island, especially in Saint-Laurent-de-l'Île-d'Orléans. Together with the thriving fishing industry of that era, it gave the Island of Orleans a maritime character.

The Island of Orleans retained its traditional rural way of life until 1935, when construction was completed on the Pont de l'Île bridge, allowing much more traffic. The crossing connects to the Chemin Royal, which was set to music in 1975 by francophone singer Félix Leclerc, in his song "Le Tour de L'île." In spite of this, the island has maintained its pastoral image and historic character, with more than 600 buildings classified or recognized as heritage property. In 1990, the entire island was designated a National Historic Site of Canada.

Today the island is a mix of suburban communities and farms. It is a popular destination for day trippers and bicyclists.

Since the days of the first French settlers, agriculture has been the main economic activity such as (potatoes, strawberries, apples, blueberries, raspberries, vegetables, vines, berries, maple products…), a notable viticulture - some small areas produce local wines whites and reds, the production of cider and aging. A cheese is produced there, the Isle d'Orléans doormat... The island, known as the "Garden of Quebec", is still an essentially rural place famous locally for its produce, especially strawberries, apples, potatoes and wineries. Sugar maple stands produce maple syrup and other products.

Also for years there has been a strong movement of the inhabitants of city of Quebec, who own second homes around the periphery of the island of Orleans.

In art and culture

Several chansonniers have made reference to Île d'Orléans in their songs, in particular:

All content from Kiddle encyclopedia articles (including the article images and facts) can be freely used under Attribution-ShareAlike license, unless stated otherwise. Cite this article:
Île d'Orléans Facts for Kids. Kiddle Encyclopedia.