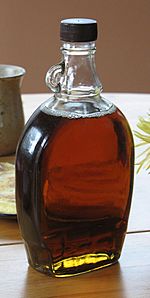 A bottle of maple syrup made in Quebec.

Maple syrup is a thick kind of syrup made from the sap of maple trees. It is made mostly of a type of sugar called sucrose, and is usually eaten together with waffles and pancakes. Sometimes, maple syrup is used to bake things such as pies, to make candy, or just as a syrup that adds sweetness to food. It is also sometimes used in making lemonade.

It was used by eastern North America and later by European settlers. Syrups are usually packed when they are hot.

The Canadian province of Quebec is by far the largest producer of maple syrup. It produces about three-quarters of the worlds maple syrup.

In cold climates, maple trees keep starch in their trunks and root before the winter, but when spring arrives, the starch is converted to sugar/sucrose that rises the sap. 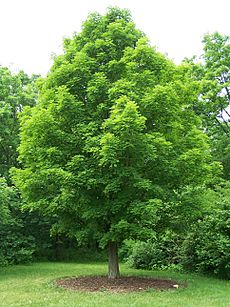 Three species of maple trees are predominantly used to produce maple syrup: the sugar maple (Acer saccharum), the black maple (A. nigrum), and the red maple (A. rubrum), because of the high sugar content (roughly two to five percent) in the sap of these species.

The black maple is included as a subspecies or variety in a more broadly viewed concept of A. saccharum, the sugar maple, by some botanists. Of these, the red maple has a shorter season because it buds earlier than sugar and black maples, which alters the flavour of the sap.

"Sugar-Making Among the Indians in the North" (19th-century illustration)

Indigenous peoples living in northeastern North America were the first groups known to have produced maple syrup and maple sugar. According to aboriginal oral traditions, as well as archaeological evidence, maple tree sap was being processed into syrup long before Europeans arrived in the region. There are no authenticated accounts of how maple syrup production and consumption began, but various legends exist; one of the most popular involves maple sap being used in place of water to cook venison served to a chief. Other stories credit the development of maple syrup production to Nanabozho, Glooskap, or the squirrel. Aboriginal tribes developed rituals around sugar-making, celebrating the Sugar Moon (the first full moon of spring) with a Maple Dance. Many aboriginal dishes replaced the salt traditional in European cuisine with maple sugar or syrup.

The Algonquians recognized maple sap as a source of energy and nutrition. At the beginning of the spring thaw, they used stone tools to make V-shaped incisions in tree trunks; they then inserted reeds or concave pieces of bark to run the sap into buckets, which were often made from birch bark. The maple sap was concentrated either by dropping hot cooking stones into the buckets or by leaving them exposed to the cold temperatures overnight and disposing of the layer of ice that formed on top. 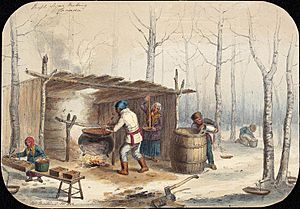 In the early stages of European colonization in northeastern North America, local Indigenous peoples showed the arriving colonists how to tap the trunks of certain types of maples during the spring thaw to harvest the sap. André Thevet, the "Royal Cosmographer of France", wrote about Jacques Cartier drinking maple sap during his Canadian voyages. By 1680, European settlers and fur traders were involved in harvesting maple products. However, rather than making incisions in the bark, the Europeans used the method of drilling tapholes in the trunks with augers. During the 17th and 18th centuries, processed maple sap was used primarily as a source of concentrated sugar, in both liquid and crystallized-solid form, as cane sugar had to be imported from the West Indies.

Maple sugaring parties typically began to operate at the start of the spring thaw in regions of woodland with sufficiently large numbers of maples. Syrup makers first bored holes in the trunks, usually more than one hole per large tree; they then inserted wooden spouts into the holes and hung a wooden bucket from the protruding end of each spout to collect the sap. The buckets were commonly made by cutting cylindrical segments from a large tree trunk and then hollowing out each segment's core from one end of the cylinder, creating a seamless, watertight container. Sap filled the buckets, and was then either transferred to larger holding vessels (barrels, large pots, or hollowed-out wooden logs), often mounted on sledges or wagons pulled by draft animals, or carried in buckets or other convenient containers. The sap-collection buckets were returned to the spouts mounted on the trees, and the process was repeated for as long as the flow of sap remained "sweet". The specific weather conditions of the thaw period were, and still are, critical in determining the length of the sugaring season. As the weather continues to warm, a maple tree's normal early spring biological process eventually alters the taste of the sap, making it unpalatable, perhaps due to an increase in amino acids.

The boiling process was very time-consuming. The harvested sap was transported back to the party's base camp, where it was then poured into large vessels (usually made from metal) and boiled to achieve the desired consistency. The sap was usually transported using large barrels pulled by horses or oxen to a central collection point, where it was processed either over a fire built out in the open or inside a shelter built for that purpose (the "sugar shack"). 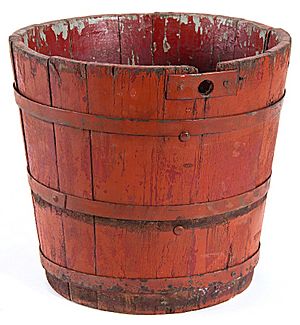 A bucket used to collect sap, built circa 1820

Around the time of the American Civil War (1861-1865), syrup makers started using large, flat sheet metal pans as they were more efficient for boiling than heavy, rounded iron kettles, because of a greater surface area for evaporation. Around this time, cane sugar replaced maple sugar as the dominant sweetener in the US; as a result, producers focused marketing efforts on maple syrup. The first evaporator, used to heat and concentrate sap, was patented in 1858. In 1872, an evaporator was developed that featured two pans and a metal arch or firebox, which greatly decreased boiling time. Around 1900, producers bent the tin that formed the bottom of a pan into a series of flues, which increased the heated surface area of the pan and again decreased boiling time. Some producers also added a finishing pan, a separate batch evaporator, as a final stage in the evaporation process.

Buckets began to be replaced with plastic bags, which allowed people to see at a distance how much sap had been collected. Syrup producers also began using tractors to haul vats of sap from the trees being tapped (the sugarbush) to the evaporator. Some producers adopted motor-powered tappers and metal tubing systems to convey sap from the tree to a central collection container, but these techniques were not widely used. Heating methods also diversified: modern producers use wood, oil, natural gas, propane, or steam to evaporate sap. Modern filtration methods were perfected to prevent contamination of the syrup. 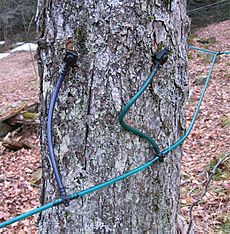 A large number of technological changes took place during the 1970s. Plastic tubing systems that had been experimental since the early part of the century were perfected, and the sap came directly from the tree to the evaporator house. Vacuum pumps were added to the tubing systems, and preheaters were developed to recycle heat lost in the steam. Producers developed reverse-osmosis machines to take a portion of water out of the sap before it was boiled, increasing processing efficiency.

Improvements in tubing and vacuum pumps, new filtering techniques, "supercharged" preheaters, and better storage containers have since been developed. Research continues on pest control and improved woodlot management. In 2009, researchers at the University of Vermont unveiled a new type of tap that prevents backflow of sap into the tree, reducing bacterial contamination and preventing the tree from attempting to heal the bore hole. Experiments show that it may be possible to use saplings in a plantation instead of mature trees, dramatically boosting productivity per acre. 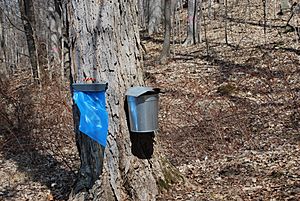 A traditional bucket tap and a plastic-bag tap

Open pan evaporation methods have been streamlined since colonial days, but remain basically unchanged. Sap must first be collected and boiled down to obtain pure syrup without chemical agents or preservatives. Maple syrup is made by boiling between 20 and 50 volumes of sap (depending on its concentration) over an open fire until 1 volume of syrup is obtained, usually at a temperature 4.1 °C (7.4 °F) over the boiling point of water. As the boiling point of water varies with changes in air pressure the correct value for pure water is determined at the place where the syrup is being produced, each time evaporation is begun and periodically throughout the day. Syrup can be boiled entirely over one heat source or can be drawn off into smaller batches and boiled at a more controlled temperature.

Boiling the syrup is a tightly controlled process, which ensures appropriate sugar content. Syrup boiled too long will eventually crystallize, whereas under-boiled syrup will be watery, and will quickly spoil. The finished syrup has a density of 66° on the Brix scale (a hydrometric scale used to measure sugar solutions). The syrup is then filtered to remove sugar sand, crystals made up largely of sugar and calcium malate. These crystals are not toxic, but create a "gritty" texture in the syrup if not filtered out.

In addition to open pan evaporation methods, many large producers use the more fuel efficient reverse osmosis procedure to separate the water from the sap.

The filtered syrup is graded and packaged while still hot, usually at a temperature of 82 °C (180 °F) or greater. The containers are turned over after being sealed to sterilize the cap with the hot syrup. Packages can be made of metal, glass, or coated plastic, depending on volume and target market. The syrup can also be heated longer and further processed to create a variety of other maple products, including maple sugar, maple butter or cream, and maple candy or taffy.

Off-flavours can sometimes develop during the production of maple syrup, resulting from contaminants in the boiling apparatus (such as disinfectants), microorganisms, fermentation products, metallic can flavours, and "buddy sap", an off-flavour occurring late in the syrup season when tree budding has begun. In some circumstances, it is possible to remove off-flavours through processing. 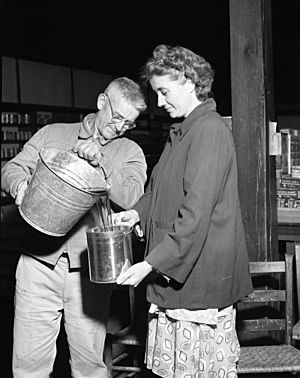 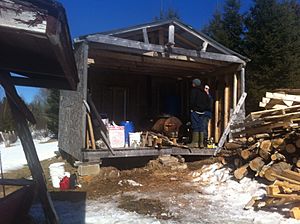 A "sugar shack" where sap is boiling. 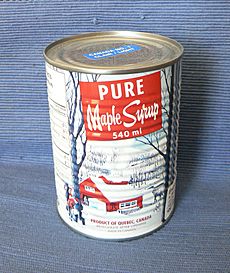 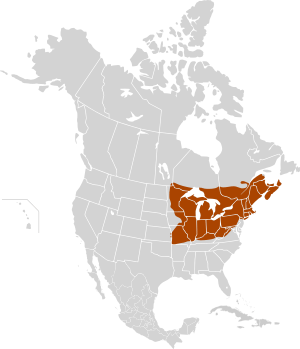 Regions in Canada and United-States where maple syrup can be produced.

Maple syrup production is centred in northeastern North America; however, given the correct weather conditions, it can be made wherever suitable species of maple trees grow.

A maple syrup production farm is called a "sugarbush" or "sugarwood". Sap is often boiled in a "sugar house" (also known as a "sugar shack", "sugar shanty", or cabane à sucre), a building louvered at the top to vent the steam from the boiling sap.

Maples are usually tapped beginning at 30 to 40 years of age. Each tree can support between one and three taps, depending on its trunk diameter. The average maple tree will produce 35 to 50 litres (9.2 to 13.2 US gal) of sap per season, up to 12 litres (3.2 US gal) per day. This is roughly equal to seven percent of its total sap. Seasons last for four to eight weeks, depending on the weather. During the day, starch stored in the roots for the winter rises through the trunk as sugary sap, allowing it to be tapped. Sap is not tapped at night because the temperature drop inhibits sap flow, although taps are typically left in place overnight. Some producers also tap in autumn, though this practice is less common than spring tapping. Maples can continue to be tapped for sap until they are over 100 years old.

All content from Kiddle encyclopedia articles (including the article images and facts) can be freely used under Attribution-ShareAlike license, unless stated otherwise. Cite this article:
Maple syrup Facts for Kids. Kiddle Encyclopedia.