Close-up of a waffle. Waffles look like squares with smaller squares on them.

A waffle is a cooked food made from a batter that consists of flour, water, baking powder, oil, and eggs. It has a gridlike appearance because it is cooked in between two hot metal plates in an electric kitchen appliance called a waffle iron. Waffles are cooked until they become golden-brown in color, with a crispy outer texture and a soft interior. Waffles are served as a breakfast or as a dessert, and they are usually served with sweet sauces or toppings. Waffle has two definitions, the edible kind of waffles, but also the verb waffle means to talk on and on, often about random things. Synonyms include ramble 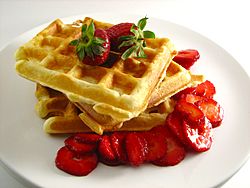 In North America, waffles are often eaten for breakfast on weekends or holidays. Freshly-baked waffles are topped with maple syrup and served with breakfast sausages, eggs, orange juice, and hot coffee.

In Belgium, France, and the French-speaking Canadian province of Quebec, waffles are often served as a dessert, after dinner is finished. Freshly-baked waffles are topped with sweet toppings such as chocolate syrup, bananas, strawberries, or whipped cream. 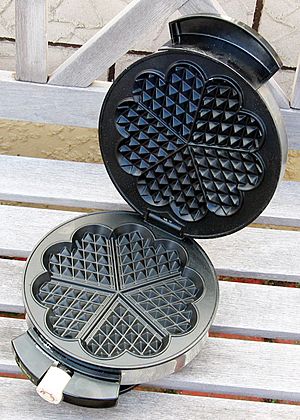 Waffles are usually made with a waffle iron. In this image the heart-shaped iron is for Scandinavian style waffles

All content from Kiddle encyclopedia articles (including the article images and facts) can be freely used under Attribution-ShareAlike license, unless stated otherwise. Cite this article:
Waffle Facts for Kids. Kiddle Encyclopedia.